Bill Barr is just now revealing that when it comes to Jeffrey Epstein and the video of his death, there is a lot more than what meets the eye.

The elephant in the room is this: did former Attorney General William Barr just settle the deafening roar of questions surrounding notorious billionaire pedophile Jeffrey Epstein’s mysterious death in a prison cell once and for all?

You are going to have to decide that on your own, but it appears clear in his forthcoming memoir, which is going to be released on Tuesday, March 8th, that Barr himself thinks that Epstein did indeed hang himself and the facts have all been settled.

Barr is most well-known for serving as Attorney General under President Donald Trump when Jeffrey Epstein was believed to have committed suicide in his Manhattan prison cell while awaiting trial on the charges of child sex trafficking in 2019, and he revealed in his upcoming memoir, “One Damn Thing After Another” that he had “personally reviewed” the security footage that proved despite conspiracy theories that yes, the financier had taken his own life.

Yet another reason why Epstein was subject to conspiracy theories was that he was linked for years to such famous names as former President Bill Clinton and Britain’s Prince Andrew.

Epstein was a previously convicted child sex offender, and so it was an open secret that he preferred the company of underaged girls. It has been strongly suspected that he provided these underage girls to rich and powerful friends with the assistance of his girlfriend Ghislaine Maxwell.

Well, to make a long story short, they finally arrested Epstein in 2019, and there was a vocal, bipartisan movement from netizens who were eagerly awaiting his trail and the details of his “clients”, which they hoped would be identified. However, even though his alleged victims were also awaiting justice, they were robbed of that when he was found dead in his cell at the Manhattan Correctional Center, hanging by his bedsheet. 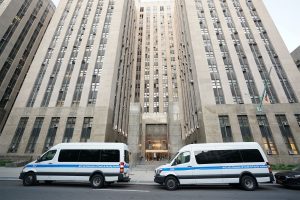 It was a time of heightened cultural division in this nation, but there appeared to be one unified response in the aftermath of his suicide: many believed that no, the billionaire did not hang himself.

Either position that you fell upon, there was no question that Epstein had plenty of high connections and had the ability to potentially expose damaging information on some very powerful people, further leading a lot of people to believe that this was some type of hit and not a suicide.
However, it is this claim that Barr cries foul in his new memoir.

“The New York City medical examiner had conducted an autopsy and ruled that Epstein killed himself by hanging,” Barr reportedly writes in the book, as Fox News reported. “Other evidence also pointed to suicide, but it was the video evidence that confirmed the medical examiner’s finding.”

“I personally reviewed that video footage,” he reveals. “It shows conclusively that between the time Epstein was locked in his cell at 7:49 p.m. on the night of August 9 and the time he was discovered the next morning at 6:30 a.m., no one entered his tier.”

Barr instead cites a “perfect storm of failures” that enabled Epstein to take his own life, which he acknowledges “understandably led people to suspect the worst.”

There was no questioning the fact that there were a suspicious number of failures that led up to Epstein’s death.

First of all, despite the fact that he was on suicide watch, Epstein’s cellmate had been transferred out shortly after his arrival and was yet to be replaced.

Moreover, the guards responsible for checking on Epstein were egregiously irresponsible, instead napping and shopping online throughout the evening. The guards even admitted to falsifying records as a cover-up for their gross dereliction of duty, but in the wind-up they were let off with nothing more than a deferred prosecution.

There was the issue of the security camera footage itself, which vanished mysteriously in 2019. Finally, even though we would have to take this with an ernomous grain of salt, there is Epstein’s own words, where he claims that he wasn’t suicidal.

Barr does note that “it was no consolation to me that an odious criminal was dead. He should have been given a fair trial and, if found guilty, made to answer for his crimes. That he was not is deeply disappointing to me.”

Whatever the case may be, that is undoubtedly the truth.

If we can take Barr’s word as gospel, then the security footage that he personally revealed would only have to be authentic to prove that yes, Epstein did indeed take his own life.

However, due to this “perfect storm” of screw-ups, these conspiracy theories surrounding the death of notorious pedophile Jeffrey Epstein are not likely to abate any time soon.