CBS aired images Sunday night purported to be photos of Jeffrey Epstein’s prison cell. Allegedly, they were taken by the Medical Examiner but the network didn’t explain how they managed to get them.

CNN describes the scene of the playboy pedophile’s cell as in a “chaotic state.” There is no explanation given for why a mattress is on the floor or how the DayGlo orange bedsheets came to be scattered around the room. 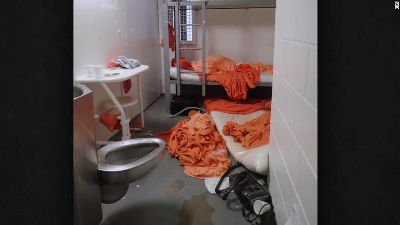 Epstein died while jailed in New York’s Metropolitan Correctional Center last August. As far as whether it was suicide or murder, the Medical Examiner ruled it suicide by hanging and that’s that.

Despite his clear ruling, the general public refuses to accept the opinion. Adding to the murk in the water, Epstein’s family ordered an independent autopsy that “has disputed that conclusion.”

Another photo displayed on 60 Minutes is a high resolution close up of what CNN describes as “one of the bedsheets that had been tied into a noose. It’s not known whether that noose was used in his suicide.” 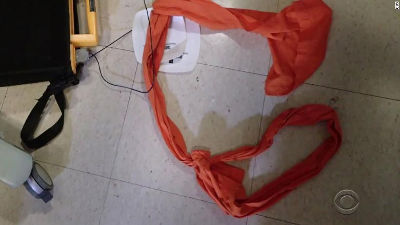 CBS also showed pictures of the corpse with “a bloody mark stretching across the middle of his neck.” CNN chose not to print those images but they did release a shot of Epstein’s purported suicide note.

“(redacted) kept me in a locked shower stall for 1 hr. Noel sent me burnt food. Giant bugs crawling over my hands. No fun!!” 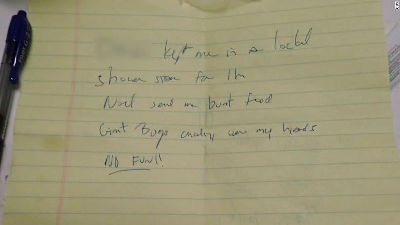 One thing for certain, the cell shown in the pictures was a far cry from his palatial New York town home with its painting of Bill Clinton in drag. He had been behind bars for weeks, deprived of his lovely Lolitas, or as prosecutors described it, his “sex trafficking ring for underage girls.”

If it was suicide, he seems to have had a lot of help. Despite the high profile nature of the federal sex trafficking charges, the incident was allowed to occur right under the noses of the guards.

Attorney General William Barr fired the acting head of the Bureau of Prisons, Hugh Hurwitz, over the “serious irregularities.”

Two of the guards who were supposed to check on him but didn’t “falsified logs saying they had done so.” They now face federal conspiracy charges as well as ones for filing false records.

The cameras weren’t working right but the guards who falsified the records claim nobody went into Epstein’s cell that night.

Another thing nobody has any good explanation for is why he was only on suicide watch for 24 hours after he was found “on the floor of his cell with a strip of bedsheet around his neck” less than three weeks before.