Christal McGee, 18, is being sued after she allegedly crashed her car while playing Snapchat’s ‘speed’ filter, and left a passenger in the car she hit with brain damage. The kicker? The lawyers suing her allege that she kept using Snapchat while she was carted off to hospital by paramedics, writing in one that she was “lucky to be alive.”
Snapchat and McGee are both named in the lawsuit filed in Spalding County, Georgia, by Wentworth and Karen Maynard. They allege that at around 11:15 p.m. Sept. 10, 2015, McGee sent a Snap while driving that recorded her speed at 113 miles per hour.

The teen then slammed into Wentworth Maynard’s car at 107 mph, according to the lawsuit. McGee and her passengers got away with minor injuries, but Maynard suffered permanent brain damage according to his lawyer. They add that he can no longer be left alone as a result of his injuries, and family members have had to pause their careers to help care for him. 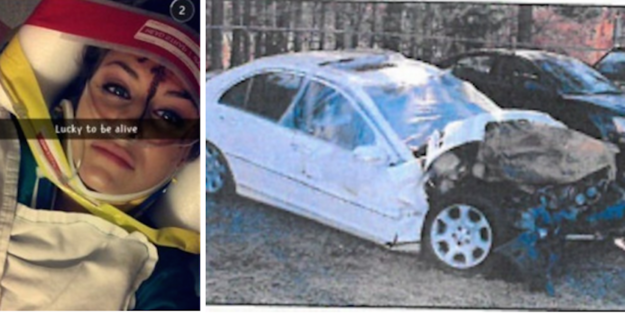 “Wentworth would get up on his own, make his breakfast, go to work, and cook dinner,” Maynard’s wife, Karen, said. “Now he’s so tired he falls asleep in his wheelchair during the day. We used to sit on the sofa and watch TV in the evening, and Wentworth would hug me. Now, he can’t do that anymore.”

The lawyers believe that Snapchat should also be held responsible because similar crashes have occurred in the past, including in Brazil:

“It must be asked to what extent Snapchat weighed the risks of its miles per hour filter before releasing it as a product into the stream of commerce. Did its developers consider the impact it could have on the life of someone like Wentworth Maynard?”

“No Snap is more important than someone’s safety,” the spokesperson said. “We actively discourage our community from using the speed filter while driving, including by displaying a ‘Do NOT Snap and Drive’ warning message in the app itself.”