This former police chief thought he could pull a fast one with the authorities, but he is now facing 73 felony charges as a result!

This former police chief in North Carolina apparently thought that the solution to his problems would be to make authorities think that he was dead. However, his plans were foiled and he was ultimately found despite his best out-of-the-box attempts to evade the law.

Before his fall from grace, William Anthony Spivey was the police chief in the Columbus County town of Chadbourn.

According to WECT-TV in Wilmington, he bonded out, and it was a year that he tried a different tack to erasing his past instead of being a man and owning up to it. Authorities say that the first thing he did was fail to show up in court, but it doesn’t end there.

It was on February 21st that he was reported missing after he had supposedly gone fishing. Authorities found his car parked at the boat landing and they even found his boat in the Lumber River, but there was no sign of Spivey, leading to suicide rumors in this small town.

It wasn’t long before Columbus County deputies discovered that the alleged suicide scene had been staged.

“Deputies arrived on the scene, along with Sheriff’s Office Investigators and Special Operations Units, including the Man Tracking and Dive Units,” the sheriff’s office shared on Facebook.

“As the Sheriff’s Office began to search the area, investigators spoke to Spivey’s friends and family who were at the scene. Investigators began collecting evidence. Family members described the incident as a possible suicide.”

“Handwritten letters were collected at the scene, along with the boat, that also contained a .22 caliber rifle with a discharged round still in the rifle,” the sheriff’s office said. “All evidence was collected by Crime Scene Investigators and processed.”

“Investigators quickly concluded that the evidence collected did not support a suicide scenario. However, with Spivey still missing, dive crews searched waters, and tracking teams searched the wooded areas for Spivey.”

Coincidentally, it was that following Wednesday that Spivey was due to appear in court, and the court proceeded to issue warrants for his arrest. They searched for him for another three days until a tip came in about a sighting at an apartment complex in Loris.

The Columbus County Sheriff’s Office and the Horry County Patrol officers and detectives showed up at his apartment on Thursday and tried to arrest him, but Spivey soon bolted. Authorities found him in the wooded area behind the apartments and arrested him. 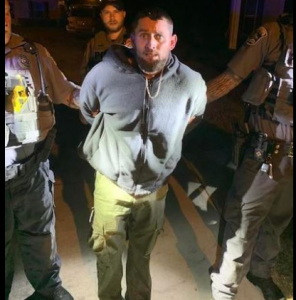 “William Anthony Spivey currently has 40 outstanding warrants for Failure to Appear,” the sheriff’s office concluded its post. “Each warrant has a bond of $25,000.00 for a total bond of $1 million dollars.”