After the commuters saw this homeless man’s sign, their faces turned bright red. It was a controversial sign, to say the least. 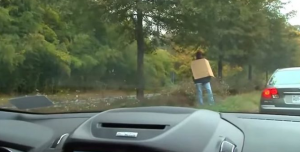 This is due in part to the fact that this “homeless” man’s sign had drivers along one stretch of road not only hitting their brakes, but also feeling dazed and confused because they realized just a bit too late that the man was not homeless at all.

Unfortunately, it’s not all that unusual to see individuals panhandling along the side of the road. However, residents in Bethesda, Maryland learned the hard way that things do not always appear as they seem. I guess they should have paid more attention!

This “homeless” man had a clear admission from his sign as he was greeting commuters during the early morning hours.

“I’m not homeless. I am a Montgomery County police officer looking for cell phone texting violations,” the sign held by the “homeless man,” who was actually Montgomery County Police Officer Patrick Robinson, boldly declared, letting drivers know that police in Bethesda, Maryland, had decided they were going to engage in a tough sting to try to stop those who were texting and driving. 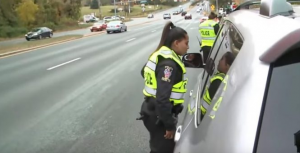 They are doing this because distracted driving is a problem that affects everyone, especially if it causes an accident, threatening their own occupants or heaven forbid those in another vehicle.

That is why it is imperative when you are behind the wheel to be aware of all of your surroundings. It is in this age of technology where people are glued to mobile phones that you can lose your attention, and a distracted driver is a dangerous driver.

Texting and driving is a serious problem.

Even though officer Robinson was only at work for a couple hours, he witnessed dozens and dozens of violations. They issued 56 tickets and 22 warnings just based on this brief instance alone, and the Montgomery County police are planning on doing this once more at other random spots within the area. It may not be long before other law enforcement agencies take their lead.