Her son was killed fighting the cops, and now she is looking for a huge payday as a result. Time will tell if she can get that much, but it does seem unlikely.

After he was killed for resisting arrest and fighting with the police, this man’s mother demanded a $17-million-payout for the death of her son. However, she was almost immediately shocked and infuriated by the decision that the state made in regards to the matter.

This was due to the fact that Sue Zawacky decided to sue the county for $17 million. This Washington state mother was outraged after she called for prosecutors to bring criminal charges for the Vancouver police officers who were involved in her son’s death. Needless to say, it didn’t go as planned.

Despite five prosecutors in many different counties being in agreement, the district attorney agreed that the police officers “acted in good faith” when they discharged the weapon against Zawacky’s son.

This particular incident occurred when Clark County Sheriff’s Office Deputy Sean Boyle pulled over 30-year-old Jenoah Donald after several residents reported that his car was circling suspiciously around an alleged drug house. The affidavit noted that Donald had a broken tail light, a recently suspended license, and no proof of registration or insurance.

Boyle soon decided that it was best for him to call for backup, so not soon after deputy Holly Troupe arrived on the scene, spotting a “ball-handled” object that had a “sharpened stake” near the console of Mr. Donald’s vehicle. They ordered Donald to keep his hands visible, but he pulled out his cell phone and reached for some pliers. Mr. Donald repeatedly refused to step out of the car and that is when Deputy Boyle attempted to remove him out of the vehicle by force.

Donald started to physically resist the officers and that prompted Boyle to threaten to release his K-9 to bite him. Unfortunately, the deputy never did return to his cruiser to get the dog.

“Deputy Boyle, as a ruse, informed Jenoah Donald that he would send his K-9 to bite Jenoah Donald if he did not stop resisting,” the affidavit for the search warrant read. “This did not gain compliance and Jenoah Donald continued to struggle with Deputy Boyle and Troupe.”

The officers tried several de-escalation techniques, but they were all to no avail. Each of the attempts only made Mr. Donald become even more aggressive, further placing the officer’s life at risk. There was even one point where Boyle punched Mr. Donald in the face and all the suspect said was, “Really?”

“Deputy Troupe attempted to gain ‘pain compliance,’” by placing some finger pressure on Donald’s jaw, but even that didn’t seem to have any effect on the suspect, according to the search warrant affidavit.

The deputies heard the car start during the struggle, and that is when Mr. Donald revved the engine, grabbing Doyle by his ballistics vest and sending the “wheels spinning.” The officer was essentially in danger of being dragged away with the suspect behind the wheel of the vehicle.

“Deputy Boyle felt the vehicle begin to move forward, and fearing he was going to be killed, he drew his firearm (Deputy Boyle is left-handed) and gave Mr. Donald a verbal warning to stop or he would be shot,” according to the Columbian.

Even though the panel of prosecutors found no evidence of wrongdoing, Sue Zawacky still wanted to see the law enforcement be punished for what happened. She announced that she was suing Clark County for $17 million. 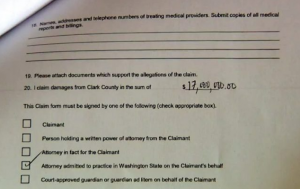 “The family feels let down and disappointed. We hope the officers will resign for the good of the community because they don’t have the patience and skills for the job,” Zawacky said in a statement. “I don’t want any more families to lose their sons. Attorney General Bob Ferguson should look into this.”

Believe it or not, we agree that this truly was a tragedy, but we also have to side with the peace officers here simply because their lives were on the line due to Mr. Donald’s actions. He shouldn’t have been fighting the cops, simple as that.