What George Soros calls “Open Society” is just code for the “New World Order.” When he talks about “open societies” in general, he’s really referring to “globalism.” With that in mind, it’s obvious from his remarks at this year’s World Economic Forum that Soros is terrified of President Donald Trump and his rampant nationalism. For Soros, this means war. He calls it a “revolutionary moment.”

Soros is upset that Barack Obama blew it in America. “The tide turned against [Globalism] after the crash of 2008 because it constituted a failure of international cooperation,” he asserts. “This in turn led to the rise of nationalism,” which he calls “the great enemy” of the New World Order.

Nationalism is a “malignant disease,” Soros believes. That’s why he hates President Trump so much. The way Soros sees it, “President Trump is a con man and the ultimate narcissist who wants the world to revolve around him.” He’s upset that President Trump actually has the grass-roots support of the conservative American public.

“He has managed to gather a large number of followers who have bought into his alternative reality. This has turned his narcissism into a malignant disease.” All of us “deplorable” Trump supporters are undoing generations of liberal social engineering overnight. Soros fears President Trump “could impose his alternative reality not only on his followers but on reality itself.” 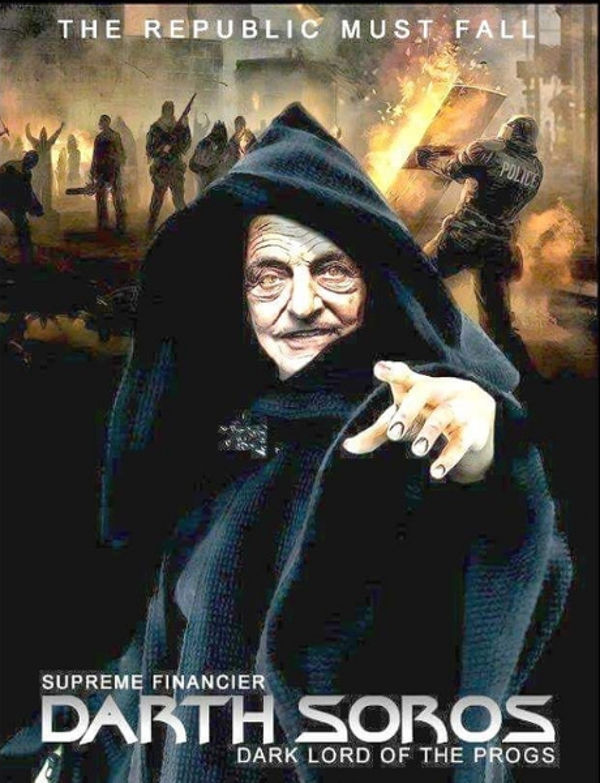 He already knows that there isn’t a chance that Trump will actually be impeached. He whines that “the trial in the Senate is shaping up to be a strictly pro forma affair because the Republican majority in the Senate is united behind Trump.”

Another thing that has Soros steaming is the way Trump turned the U.S. economy around, and pulled it out of the toilet. Obama worked real hard to flush our financial power down the tubes. To Soros, it’s a crisis. “Trump’s economic team has managed to overheat an already buoyant economy. The stock market, already celebrating Trump’s military success, is breaking out to reach new heights.”

Darth Soros has a plan. “An overheated economy can’t be kept boiling for too long,” he hints. This is coming from the guy who forced the U.K. to abandon the sterling silver which formerly backed their currency. Now, they print toilet paper “fiat” money like the rest of the world.

From the New World Order point of view, he remarked in his speech, “the situation is quite grim.” The rise of Boris Johnson in the U.K. and the accomplishments of “Brexit” are also taking a toll on their plots. As he told the gathering in Switzerland, “The fight to prevent Brexit — harmful both to Britain and to the EU — ended in a crushing defeat.”

Things aren’t going real well in socialist Venezuela either. Their economy collapsed because nobody has any incentive to produce anything. Why work when the moochers get the same split for doing nothing? Soros was disappointed that “by the beginning of this year almost 5 million Venezuelans” had fled.

He’s not ready to give up yet. “It would be easy to give in to despair, but that would be a mistake,” he assured the crowd in Switzerland. There’s still a little bit of time to toss a monkey wrench into the works before America re-elects President Trump. Trump’s problem, Soros notes, “is that the elections are still 10 months away and in a revolutionary situation, that is a lifetime.”

Stay tuned for a big surprise, he teases. “As a consequence, outcomes are unlikely to correspond to people’s expectations.” In a “revolutionary moment,” advises Darth Soros, “the range of possibilities is far wider than in normal times.”

Soros announced that since he won’t be around much longer, he’s going to throw a huge pile of money into brainwashing the younger generation. “I should like to see it implemented while I am still around,” he chuckled. To get the ball rolling, he wrote a billion dollar check.

He thinks “that as a long-term strategy” their “best hope” is perverting the youngsters. Three decades ago, Soros set up the Central European University specifically to “advance the values” of the the New World Order.

Hungary’s leader, Victor Orban, shut it’s doors in 2018 for helping illegal aliens invade the country. Soros quickly moved the indoctrination center to Austria. Soros knows that despite the foothold that his propaganda mill gained in Europe, he needs a lot more help.

“CEU is not strong enough by itself to become the educational institution the world needs. That requires a new kind of global educational network,” he explains. They already have a partner in the states. “CEU and Bard College in the U.S. are already long-term partners.” Bard is described as a “mainly undergraduate liberal arts college,” quietly supported by the New World Order.

Soros is going to use all that money to expand his NWO network around the globe. It will be called the Open Societies University Network.

You can bet that there will be a comprehensive curriculum based around the myth of “climate change.” Soros is glad that the public “is beginning to be aware of the dangers of global warming.” They did a great job of convincing Europe that CO2 is much more of a problem than any of the toxic poisons being dumped into the air, water, and soil. “It has certainly become the top priority of the European Union,” he says, “but we can’t count on the United States while Trump is in power because he is a climate denier.”

President Trump isn’t about to let China buy “carbon credits” for our clean air which will allow them to keep polluting as much as they want. The scheme is nothing but a way to create money out of smog, without doing anything about the smog.