You can forget about global warming. The real threat to human survival is toxic poison. Tons of deadly man made chemicals are dumped into the planet’s air, soil, and water every single day. A recent study by the Environmental Working Group looked at just one class of harmful compounds, and the data reveals that the situation is a whole lot worse than the experts imagined.

EWG did a series of lab tests looking for toxic fluorinated chemicals called “perfluoroalkyl substances” or PFAS for short. What they found was shocking. “It’s nearly impossible to avoid contaminated drinking water from these chemicals,” warns David Andrews, a co-author of the report. “Everyone’s really exposed to a toxic soup of these PFAS chemicals.”

When he says everyone, he means all across America. “Based on our tests and new academic research,” they found “PFAS widespread in rainwater.” Their scientists “now believe PFAS is likely detectable in all major water supplies in the U.S., almost certainly in all that use surface water.”

The results also “confirm that the number of Americans exposed to PFAS from contaminated tap water has been dramatically underestimated by previous studies.” The biggest part of the problem is that these chemical compounds don’t go anywhere, they just build up.

Dr. Andrews explains that PFAS are called “forever chemicals” because “once released into the environment they do not break down, and they build up in our blood and organs.” A study done by the federal Centers for Disease Control and Prevention “show that the blood of nearly all Americans is contaminated with PFAS.” 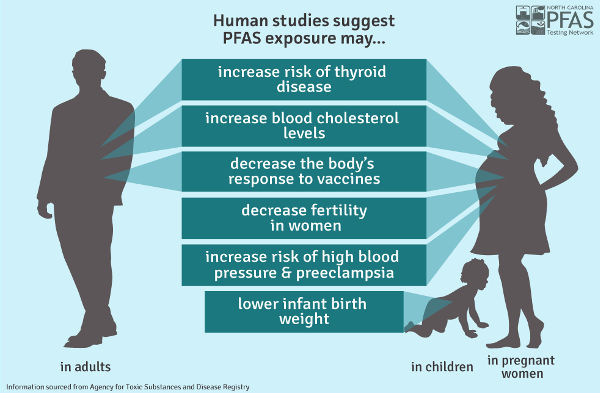 Not only do PFAS chemicals increase the risk of cancer, they cause liver damage. Worse, by harming fetal development, they threaten the ability for many species — including humans, to reproduce. Another factor is that they make vaccines less effective.

The most common uses of these chemicals were in Teflon cookware and Scotchguard fabric treatment. Firefighting foam is another major source of contamination.

The Environmental Protection Agency has been turning a blind eye to these chemicals for decades. In 2001 they admitted being aware of the drinking water problem but “has so far failed to set an enforceable, nationwide legal limit.” Early last year they promised to get around to it soon.

Out of the 44 sites the EWG tested in 31 states and the Capitol city of Washington, D.C., only one location came up clean. Meridian, Mississippi uses wells that are 700 feet deep. At the other end of the range, Brunswick County, North Carolina and Quad Cities, Iowa were totally off the scale.

Scientists turned to a new form of similar compounds as replacements but they may have turned out to be even worse for the environment. More than 600 PFAS class chemicals are in current use, including the new generation of “short-chain” PFAS. The manufacturers swear up and down that these are much safer than the long-chain variety but “the EPA allowed them on the market without adequate safety testing, and the new chemicals may pose even more serious problems.”

A separate study indicates that short-chain PFAS are “more widely detected, more persistent and mobile in aquatic systems, and thus may pose more risks on the human and ecosystem health” than their long-chain cousins. To make matters worse, we have methods now to remove the long-chain variant from drinking water but “existing drinking water treatment approaches” are “less affective for short-chain PFAS.”

The most effective way to remove these compounds from your water is through reverse osmosis. “Studies have demonstrated that reverse osmosis treatment is effective for removal of all types of long and shorter-chain PFAS we tested for, including PFOS, PFOA, PFBS, PFHxS, PFHxA and PFNA.”

Not all bottled water is PFAS free, read the label carefully. In 2019, “the Massachusetts Department of Public Health advised pregnant women, nursing mothers and infants to avoid drinking certain brands of bottled water due to their high levels of PFAS contamination.”