President Barack Obama’s White House photographer, Pete Souza, tried to stoke the flames of a conspiracy theory on Twitter Sunday, suggesting that a situation room photo, taken in the Trump White House during the raid on Abu Bakr al-Baghdadi’s Syrian compound was staged — and ended up getting wrecked.

The photo, which shows President Donald Trump, Vice President Mike Pence, and the Joint Chiefs of Staff sitting around the table in a secure room in the White House mirrors a photo released of then-President Barack Obama and his advisors, huddled together as Seal Team Six raided Osama Bin Laden’s home in Pakistan.

Posting the photo to his Twitter account, Souza claimed to have looked at the picture’s metadata, which listed the time the photo was taken as “17:05:24,” or just after 5:00pm in Washington, D.C. Claiming that the raid took place at 3:30pm EST, Souza suggested that the photo was staged after the raid had concluded, possibly in order to compete with Souza’s Obama-era photo of the Bin Laden situation room.

“The raid, as reported, took place at 3:30PM Washington time. The photo, as shown in the camera IPTC data, was taken at ’17:05:24,’” Souza tweeted at White House digital director Dan Scavino. 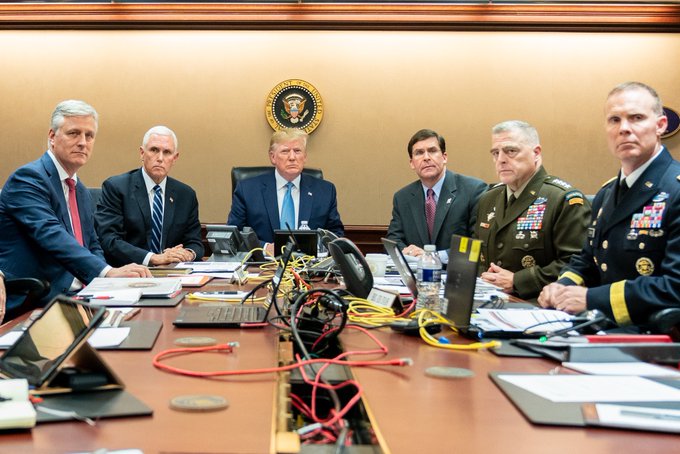 25.5K people are talking about this

Souza’s tweet, which seems petty even by Twitter standards, set off a firestorm on Twitter, with leftists taking a hearty guffaw at the Trump team’s supposed staged situation room photo. At the time of publication, the single tweet has just over 20,000 retweets and is closing in on 60,000 likes. One enterprising liberal reporter, for the outlet “Daily Kos” even scoured the President’s public schedule and concluded that, in fact, Trump was golfing at 3:30, putting him far from the White House during the actual time of the raid.

But not everyone was buying the suggestion that the raid was somehow over at 5:00pm, even if the raid began at 3:30pm. A number of people on Twitter, Newsweek reports, suggested the same to Souza, adding that it’s entirely possible that Trump and his team “were still there 2 hours later waiting for the crew to return to the base.”

Souza was forced to acknowlege that it was “possible” Trump and his team were still assembled in the situation room, communicating with the U.S. military teams leading the raid on al-Baghdadi’s compound, but he remained unconvinced that the photo wasn’t staged.

“It’s entirely possible that the raid was still going on at 5:05 p.m. Before drawing definite conclusions about the photo, reporters need to nail down the actual timeline of the raid,” he tweeted as a follow up.

That’s when more details of the raid leaked out.

The New York Times, which laid out the timeline for the Special Forces operation, listed 5:00pm Washington, D.C., time as the start time for the raid. The full raid was completed and al-Baghdadi was dead by 6:10 — putting the timing of the photo well within the time frame of the raid.

Souza corrected the record. Sort of.

The latest reporting from the NYT: the helicopters left Iraq at 5PM (Washington time), and they reported it was about a 70-minute flight to Syria. So actual raid had to happen some time after 6:10PM. https://twitter.com/PeteSouza/status/1188471757579194371 …

2,170 people are talking about this