The better question is CAN Slidefire be banned.  The product is currently legal because, there are no “mechanical” parts that modify the inner working of the firearm, since the stock, has no springs, or assists, it technically doesn’t turn the gun into an “automatic” or select fire weapon.  This is because with every pull of the trigger you still get only 1 round firing regardless of how fast the trigger is pulled.

This is how Slidefire words it

By definition, our current rifle stocks are not adjustable stocks or trigger manipulation devices. Slide Fire® products have been approved by the Bureau of Alcohol, Tobacco, Firearms and Explosives (BATFE) and we provide a copy of the approval letter on our website www.slidefire.com to any interested individual. Since our launch in 2010, Slide Fire® has not been notified by any individual state that our products conflict with any state laws.

We would like to provide a link from the National Rifle Association (NRA) to empower our prospective customers to know the current firearm laws for any state. Please visit www.nraila.org/gun-laws.aspx to learn more or contact your State Department of Justice. Ultimately, it is the responsibility of the consumer to know the current laws and regulations of their state. 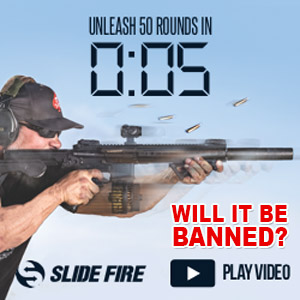 To change this, Congress would have to rewrite the NFA  (mechanical)It would HAVE to be a kind of rewrite that would include THE STOCK it’self, hearkening back to the Sig Brace Shouldering issue that has since been over turned.

‘Bump fire’ devices turn rifles into machine guns: How is that legal?

A defense of assault-style rifles like the AR-15 used in the Sandy Hook massacre is that they’re basically just semiautomatic rifles with cosmetic improvements. In other words, each bullet needs an individual trigger pull in order to explode out of the barrel. Actual spray-trigger machine guns, after all, have been illegal on the civilian market since 1986.

But debate around so-called bump fire devices that “simulate” automatic fire by utilizing a rifle’s recoil to shoot the next bullet have caused some to wonder whether the devices could inspire a bureaucratic reclassification of assault weapons into machine guns, which in turn could lead to a de facto ban without Congress getting involved. That question may be politically sharper now, especially since an all-out assault weapons ban, according to University of Virginia political scientist Larry Sabato, is “dead in the water.”

Since 1986, U.S. gun-makers have been prohibited from manufacturing civilian guns capable of firing automatically. The relatively few machine guns in circulation are held mostly by collectors, who pay up to tens of thousands of dollars for them. ATF records show that 11,752 machine guns are listed as held by gun owners in Nevada.

There are other ways to get a rifle to approach automatic fire, however, and it’s those means that investigators are likely probing now.

As the Trace has reported, gun enthusiasts often use “bump fire”—a method using the recoil of a semi-automatic firearm to fire several shots in succession—to legally and cheaply hack their way to a faster rate of fire.

Reporter Alex Yablon focused his story on the Bump Fire stock, a $99 accessory that achieves the desired effect:

We are sure its ONLY A MATTER OF TIME till someone tries to ban the product.  Currently you can get this product HERE, but give it a time because they are so overloaded with all the requests that their site is running a little slow.