The New York Police Department (NYPD) has confirmed that the Monday morning explosion near Times Square was terror-related. The perpetrator was identified as 27-year-old Akayed Ullah, who said he was inspired by Islamic State propaganda online.

“Let’s be clear – this was an attempted terrorist attack. Thank God the perpetrator did not achieve his ultimate goals. Our first responders were there quickly and the only injuries we know of right now are minor,” De Blasio tweeted following the attack.

“We are a target because we prove a society of many faiths and many backgrounds can work – we show democracy can work. But we are the most resilient place on earth. We’ve proved it time and time again,” he continued. 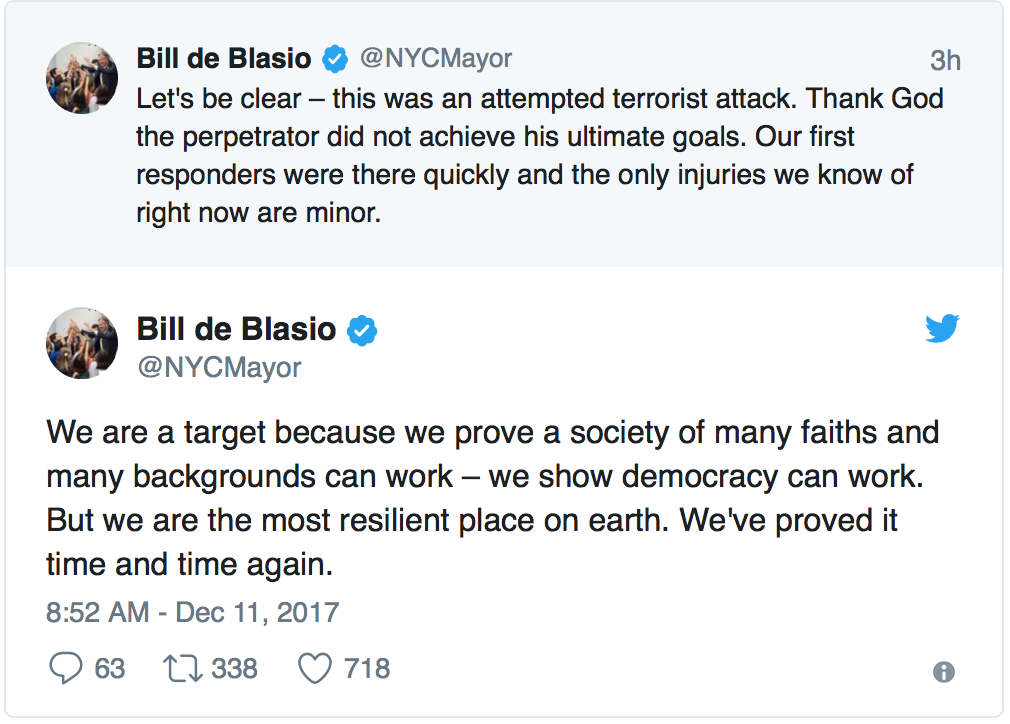 When asked whether the suspect had ties to Islamic State (IS, formerly ISIS/ISIL), O’Neill said “he did make statements”but refused to elaborate.

ABC News reported that Ullah told the authorities he was inspired to carry out the attack by IS propaganda he accessed online.

The explosion was caused by a crude pipe bomb strapped to the man, which injured him and four others when it went off in the subway corridor near Times Square during morning rush hour. He was also in possession of a second device, which did not detonate.

Surveillance cameras captured the man walking through the crowded passageway between 7th and 8th Avenue under 42nd Street when the bomb detonated at 7:20am local time. The suspect came to the US from Bangladesh seven years ago, according to AP.

Elrana Peralty, a customer-service worker for Greyhound buses in the Port Authority, said she did not hear the explosion.

The NYPD, FBI and the FBI’s Joint Terrorism Task Force are currently investigating the attack, according to NBC News.

More info about the arrest:

Suspect Akayed Ullah, 27, is in custody and four others are injured following an explosion at the Port Authority bus terminal in Midtown Manhattan.

The blast reportedly took place at 42nd street and eighth avenue.Three subway lines are being evacuated as a result of the incident.

The suspect, who is understood to be in his 20s, sustained non-life threatening injuries during the explosion, the NYPD has said. The man was reportedly also in possession of a second device, which did not detonate.

Four people, including the suspect, suffered injuries during the blast, according to the New York Fire Department. None of the injuries are life-threatening.

In a press conference at the scene, New York Governor Andrew Cuomo said the explosion was an attempted terrorist attack.

“There was an explosion, it was an effectively low tech device. There were several injuries, we hope minor and it was handled exceptionally well,” he said.

Mayor Bill De Blasio said there are no additional incidents. “There are no credible and specific threats against New York at this time,” he said.

The Fire Commissioner Daniel Nigro named the suspect as 27-year-old Akayed Ullah. He suffered burns to his body. The joint terrorist task force is now conducting a thorough background check into Ullah.

John Miller of the NYPD’s counter-terrorism unit said Ullah’s device was “based on a pipe bomb” and “was affixed to his person with a combination of velcro and zip ties,” Miller said.

When asked whether Ullah had any connection to Islamic State (IS, formerly ISIS/ISIL), Miller said that the suspect “made statements” but he refused to provide any further information.

A video posted on Twitter by Pete Sayek shows numerous fire engines at the scene. Sayek said he nearly got trampled in a rush during the incident.

Instagram user Joseph Zagami describes what he saw on his commute to work.

The White House Press Secretary Sarah Huckabee Sanders confirmed that US President Donald Trump has been briefed on the explosion.

The area remains cordoned off, social media users have been sharing footage from the scene.