“I find this extremely offensive,” said by a woman who goes by the name Ashley Coleman on Facebook. “Please speak with the franchise owner,” she added. 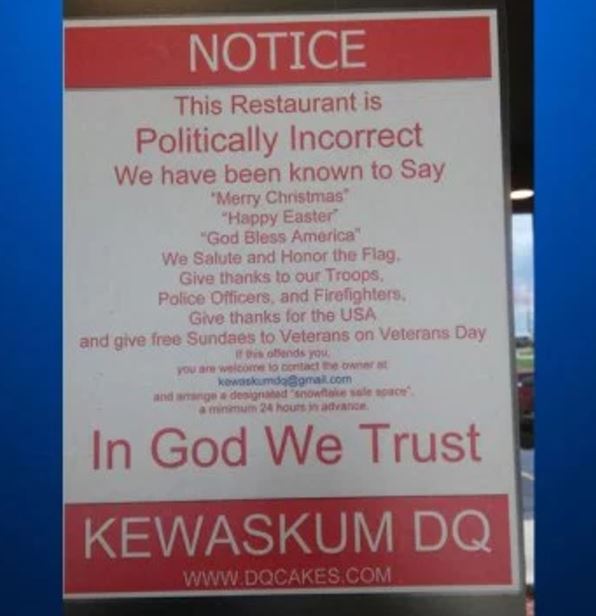 Dairy Queen Owner Kevin Scheunemann posted a sign saying “This restaurant is politically incorrect,” and it offended an out-of-towner who took to social media to complain.

“This restaurant is politically incorrect,” warns the sign Scheunemann posted some four years ago. The poster warns that they “have been known to say” things like “Merry Christmas,” “Happy Easter,” and “God Bless America,” and give away free ice cream sundaes to veterans on Veterans Day. The bottom of the sign, in large letters, reads: “In God We Trust.”

“I find this extremely offensive,” said by a woman who goes by the name Ashley Coleman on Facebook. “Please speak with the franchise owner,” she added.

But the community has since rallied around the Dairy Queen store, seemingly in agreement with the sign’s sentiments.

“Business is good,” noted local CBS reporter Julie Parise, “thanks in part to a sign that’s hanging on front door.”

Owners in the same area also came to Scheunemann’s defense.

“He posted it on the door so you see it before you walk in,” said local store owner April Serwe. “You don’t have to walk in if you don’t agree with it.”

Some Kewaskum residents even said the sign is unnecessary, since most all of them “share the same values,” notes CBS 58.

“In this small community, I don’t think it’s a problem,” said local Liz Torrison. “We’re all just liking each other and having fun.”

Dairy Queen has not dictated the owner take down the sign, but they did distance themselves from the poster in a statement:

American Dairy Queen Corporation does not encourage our independently owned and operated franchisees to post non-business related messages in their locations or on their external reader boards. This sign expresses the views of this independent owner only and does not speak for ADQ Corporation or any of our other independent franchise owners. We expect our franchisees and employees to treat every person who walks through our doors with the utmost dignity and respect. Nothing less is acceptable.

For anyone uncomfortable with the statements made on the poster, Scheunemann said he’d be willing to make accommodations for anyone.