Reporter Dan Gray was surrounded and accosted by BLM protesters in Stockton, Mo as he was reporting on the aftermath of the not guilty verdict against Stockton Police Officer Jason Stockley.  Stockley shot and killed a suspect after a three mile chase through the city streets at an unsafe speed.

The city is bracing for a long night of protests that will probably get violent at some point.  Residents should stay indoors tonight.  As you can see antifa and BLM are out in force.

Last night a SUV plowed through a crowd of BLM protesters blocking the streets:

A man got tired of Black Lives Matter protesters who were blocking the street and preventing him from going on his way.  When his patience ran out, he hit the gas and drove right through the protesters.  BLM was protesting the killing of a black man back un 2011.  Jason Stockley, the officer in question is accused of killing an unarmed man, then planting the gun in his car after a long high speed chase.

He is awaiting the decision from the judge, but it does not look good as the evidence does not back up his story.  The gun which was sitting on the front seat of Anthony Lamar Smith’s car did not contain any DNA from Smith but does contain Stockley’s.  His shot that killed Smith came from just six inches away and the shell casing was found in Smith’s car despite the fact that Stockley claimed he was moving away from the car at the time.

Armed Protestors Showing Up In Downtown St. Louis “FOR EVERYBODY THAT SAY IT’S NOT REAL” [VIDEO] 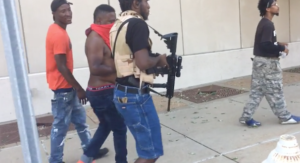