A Buffalo Wild Wings employee in California angered customers after he muted the national anthem playing before a Monday Night NFL game despite protests. He blamed it on company policy claiming it was “too controversial”. The incident took place on the anniversary of the September 11 terror attacks back in 2001. A customer by the name of Lori took a photo of the manager and spread it around social media. 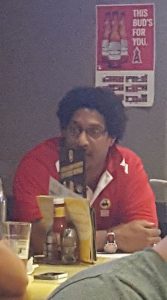 A manager on staff apologized immediately for their employee but the damage was done. The franchise owner also issue an apology, clarifying that they did not have a policy against turning down the Star Spangled Banner.

Buffalo Wild Wings has suspicious policies in the first place, notably one where they refuse to serve police currently on duty because years ago they have declared their business to be a “gun free zone,” most notably after a group of eight police officers were asked to leave. At the time, the general manager of that location called the incident a “huge mistake” and apologized to the police. They really do have a gun-free zone policy, thought — but it’s supposed to excludes on duty and off duty police officers.

On the Facebook page for the Soldiers of the Hotel California (a group for active and retired correctional staff with California Department of Corrections) posted this message:

Attention Facebook friends let’s meet this coming Sunday at Buffalo Wild Wings in Eastvale CA. 10:00 AM
…and show America the respect it deserves. Let’s play the National Anthem on our cell phones loud and stand with our hand over our hearts and sing out loud before the game. Then walk out.
The Manager at the aforementioned Restaurant is lowering the TV volume when the National Anthem is played at the beginning of the football game.
So let’s show him that we don’t need the sound to sing our National Anthem.

Jason Chaffetz, a Fox News contributor and former Chairman of the Oversight & Government Reform Committee in the House of Representatives, posted this on Twitter when he realized that Buffalo Wild Wings was dragging their feet on a response:

.@BWWings you are on the clock. Are you in favor of playing the National Anthem or not? https://t.co/fgHLZ3XSAF In CA it was silenced

“We do not have a policy about this. Our focus is always to provide a great experience for all our Guests on game day — and every day.” 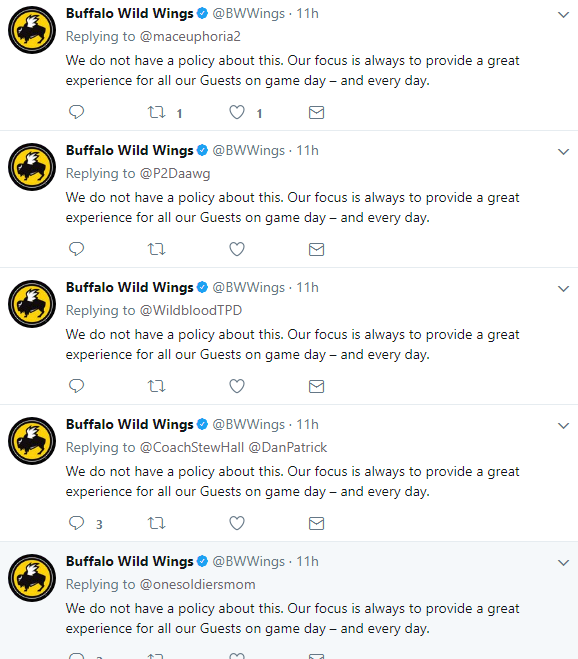