Check your old jars in the house! Your 25-cents could be worth thousands of dollars. If you have 1970-minted quarter hurry and get it looked at. It was just discovered that people are paying up to $35 thousand on eBay for the rare coin. 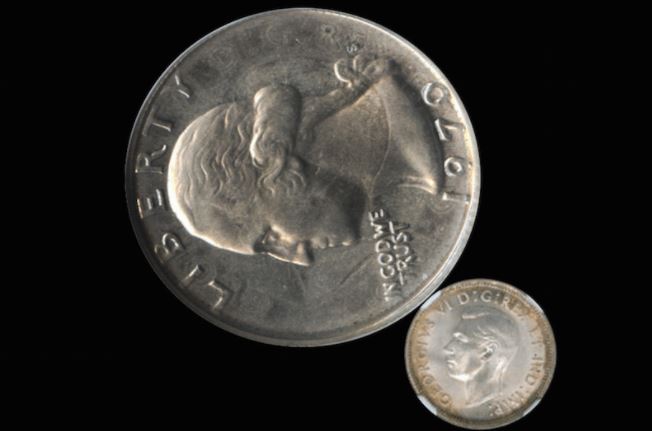 The 1970-minted quarter is so valuable due to minting error that is driving the price so high. This version of the 1970 quarter was actually formed over top of a 1941 Canadian quarter. If you look on the back of this coin, you’ll spot an upside down 1941 mark on the back. It’s located above the word “dollar.”

The man selling the coin for $35k on eBay is Mike Byers, and he’s actually written a whole book on minting errors. Would anyone actually pay this amount? Apparently so. There are currently over 30 people interested in bidding on the rare coin.

Mike Byers is the man selling the coin for $35k on eBay, and he’s written a whole book on minting errors. There are currently 30 people interested in bidding on the rare coin.

According to the item description on eBay, Byers writes:

“Proof coins are struck by technicians who had feed the blanks into special presses. They are produced, examined and packaged using extreme quality control. It is very unusual to find major proof errors.”

Byers goes on to explain why this quarter is worth tens of thousands of dollars.

“This unique 1970-S Proof Quarter from the United States was over struck on a 1941 Quarter from Canada. This mint error was originally discovered in [a] group of San Francisco Proof Errors that was auctioned by the State of California. … This is one of the most fascinating and intriguing proof mint errors ever discovered.”

What are you waiting for? As long as you arrived in your home bring out your old jar and start searching this rare penny.