A young girl in Ohio was rescued by police officers after she was molested by her own father and his wife several times. However, investigators later discovered a terrifying ordeal much worse than they imagined.

Jeremy Huffman and his wife, Krista, were arrested after they sexually abused the 14-year-old girl on Rea Avenue in the town of Columbus, Ohio and giving her a tattoo with an HIV infected needle. 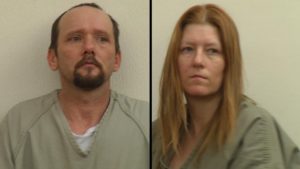 Krista reportedly asked her husband to give her a tattoo. The couple is HIV positive. After finishing his wife’s request, they then decided to mark their badly abused child for a tattoo they chose using the same needle.

However, it was discovered after a grand jury handed down a 20-count accusation on Jeremy Huffman earlier this month on more charges of rape, gross sexual imposition, and assault.

It was revealed after Jeremy made several phone calls to his wife while in jail admitting what he did to his daughter. Every conversation was captured because all jailhouse calls are recorded.

Franklin County, Ohio Prosecutor Ron O’Brien said, “Typically a child that age would not or should not be tattooed.”

O’Brien did not reveal whether the victim contracted the HIV virus. When asked if she had been tested, he responded, “I can say a person in these circumstances typically would be tested.”

The girl has yet to be tested for HIV and she didn’t even know they were both infected with it throughout the sexual assault and unwanted tattooing. What made it more tragic is the possibility of having contracted with AIDS, which she won’t ever recover.

Jeremy is being charged with felonious assault and child endangerment and faces up to eight years behind bars. A bond of $75,000 has been set for him. Further, the judge ordered that should Jeremy manage to pay his bond, he is to stay away from all children.