Meeting at a previously arranged conference in the Chinese city of Xiamen, Chinese President Xi Jinping and Russian President Vladimir Putin have agreed to “appropriately deal” with North Korea in the wake of yesterday’s nuclear test. Putin and Xi agreed “to stick to the goal of DE-nuclearization on the Korean Peninsula and keep close communication and coordination to deal with the new situation,“ , Chinese Xinhua news reports. 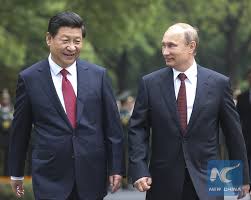 The two leaders meeting was the ninth of the so-called BRICS summit, which is scheduled for September 3rd-5th. Earlier in the day, the Russian Foreign Ministry issued a condemnation of the North Korean test. The ministry’s statement said; in a situation like this, it is essential “to keep composure and to restrain from any acts, which may lead to further escalation of tensions.” The test is “another example of Pyongyang’s outright disregard” of UN Security Council resolutions and international law.

“We cannot but regret the fact the DPRK [North Korea] leadership is creating grave threats to peace and security on the Korean Peninsula and the whole region by its actions, which are aimed at undermining the global non-proliferation regime. The continuation of this line is fraught with grave consequences for the DPRK itself.”

Meanwhile, North Korea’s state media is reporting that Kim’s government has successfully tested a hydrogen bomb capable of mounting on an ICBM. Pyongyang’s claims that it developed a more advanced hydrogen bomb small enough to be ICBM capable came just before the test blast. Sources inside the government proclaimed the test to be a complete success. They also said it was a “meaningful” step towards completing the North’s nuclear weapons program.

President Trump is said to be weighing all options while other leaders around the world are calling for a complete boycott of the North Korean government.