BREAKING NEWS: The National Weather Service (NWS) has issued Its first official weather warning concerning the probably land site location of the category 5 hurricane named Irma. Sources at the NWS said today that they are very upset with local newscasters who are hyping the possible track of the major hurricane. In fact, the NWS has officially warned people to watch out for “fake forecasts” that say Hurricane Irma is set to make landfall in the state of Texas. 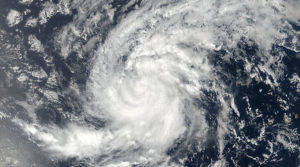 It is a possibility that Texas could be hit by hurricane Irma in the coming days but is highly unlikely. Texas is still reeling from the impact of Harvey and to imply Irma could strike there is just cruel. The facts are there is no way anyone can know where the storm will make landfall. In fact the NWS is not even sure if it will hit land at all.

Harvey, the storm that wouldn’t leave, claimed the lives of more than 40 people and left around 430,000 people living in shelters. With the development of second major storm system, Irma, has US residents worried about where it will strike. What has many forecasters upset is not its track, but the way some local weathermen are playing on peoples fears.

The NWS issued its warning against fake forecast of Irma’s path following suggestions online that it could follow a similar path to Hurricane Harvey. One fake forecast was supposedly issued by the NWS and National Oceanic and Atmospheric Administration (NOAA). It shows Irma traveling through the Gulf of Mexico and making landfall near Houston.

But the US National Weather Service says it had nothing to do with that forecast and has moved to quell any panic. The Service says that their latest projections only extend as far as Tuesday. At that time, Irma is still well out over the Atlantic Ocean. There is simply no way anyone can know where or even if Irma will make a landfall.

The latest bulletin from the NWS was released on Friday and shows the storm is actually almost as far from Africa as it is the US. Irma is expected to remain a powerful hurricane into next weekend. But it is still way too early to tell exactly what direction it will take. Even the most sophisticated computer models can’t agree on it’s path. They show over 100 possible paths for the storm with only about one third hitting land.

All they agree on is it’s headed towards the Dominican Republic and it will end up in the North Atlantic. Other than that, where it will go is anybodies guess. The best thing you can do is monitor the NWS website and make sure you are prepared. If officials tell you to evacuate, then do not hesitate. Leave the area at once.

The NWS estimates it will be about Tuesday before they will have an idea of where Irma will go. Even then the margin of error could be as much as a thousand miles.