A police K-9 dog helped pull a knife-wielding suspect to the ground outside a property in Orange County, according to dramatic video footage taken on a cellphone camera. After the suspect threw a punch at a lone officer, the dog was released out of the police vehicle, which was enough to settle the situation.

Randy Martinez, 23, who lives in Newburgh, Orange County, said he was leaving his house with a friend when a man, identified as Tony Mann, 31, wandered into his driveway and threatened him with a knife.

“I rolled down the window and was going to tell him he can’t be on my property, and then he takes out his knife, and I’m just like, ‘Oh, God, no. What’s going to happen?'” Martinez told the Times Herald-Record. 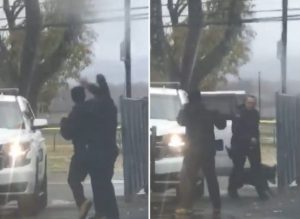 According to Martinez, Mann appeared to be on drugs; he was dancing around, making lewd hand gestures, and wielding a knife.

Martinez was worried about his loved ones inside the home; his mother, a family friend, and Martinez’s aunt were cooking near the back door of the residence.

The police officer is seen trying to talk to Mann, who appears to make strange movements before punching Newburgh Police Officer Roman Scuadroni in the head.

The 23-year-old called 911, and when K-9 Officer Roman Scuadroni responded with his police dog, Lee, Martinez started filming the interaction on his cellphone.

Lee quickly pounces on the suspect, chomping down on his arm, as the police officer puts his arms around Mann’s neck to try to restrain him. Mann is ultimately forced to the ground.

Another officer soon arrives on the scene to help with the arrest, all while the dog is still actively pursuing Mann before he is eventually pulled off by Scuardroni, who suffered minor cuts and injures.

Investigators said they found a folding knife on Mann, who was transported to a hospital emergency room for intoxication and to be treated for a minor dog bite.

He later uploaded the footage to Facebook, captioned: “This is not police brutality. They were doing [their] job, as this man came into my property and threatened me and my family.”