The LA County sheriff just sued LA County and the reason why is absolutely perfect and it is going to put them in their place!

Although it has been nearly 60 years, Men’s Central Jail is still in business, and it has housed some of the worst of the worst in Los Angeles, including the “Night Stalker” Richard Ramirez, Charles Manson, the “Golden State Killer” Lonnie Franklin, and even celebrities such as Sean Penn or OJ Simpson.

There is now a “Care First, Jails Last” approach being adopted by LA County lawmakers that would close the jail. That’s all well and good, but there are noo plans on how they would re-house the population, which currently is about a third of the county’s 12,100 inmates. The most affected members would be the 900 inmates with mental health problems.

LA County Sheriff Alex Villanueva is responsible for looking after the world’s largest jail system, and he is planning to sue the Board of Supervisors to keep this county’s famous lockup open. The LA County Sheriff’s Department is not only struggling with keeping this open, but they are grapplihg with a tremendous surge in crime. Among other things, there has been a 4% increase in murders over the past couple years along with a $47 millilon decrease in incarceration funding.

“They don’t have the legal authority to do this. They think by removing the budget from us that we will be forced to close the jail,” Villanueva told the Washington Examiner. “But every single inmate is there by orders of the court, so the board has no authority to intervene and release them from custody. They are smoking some strong stuff at the Board of Supervisors.” 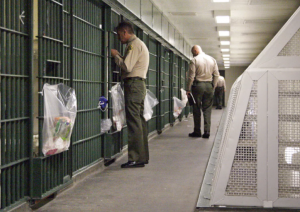 LA voters elected Villaneuva three years ago and he has almost continually battled the board throughout his tenure to keep the traditional public safety measures in place even thougn the increasingly liberal lawmakers have deemed them too harsh. The board also continues to rebuff Villaneuva’s requests for outside counsel.

“Like all county department heads, you are responsible for operating the Sheriff’s Department within the parameters of the budget,” wrote County Counsel Rodrigo Castro-Silva in a Dec. 28, 2021, letter. “Your disagreements with the Board regarding budgetary matters is not a basis for independent outside counsel.”

Castro-Silva wants Villanueva to “work alongside the Board” to create a “new model of criminal justice policies to offer more effective rehabilitative options and better serve the community.”

To his credit, Villaneuva has also criticized the board because they seem to be attempting to make counseling a priority yet at the same time they want to release mentally-ill inmates into the community.

The closure might run into pushback from the federal government because they have been monitoring all county jails since 2015 under a decree of federal consent. The ironic thing is that it stemmed from a lawsuit where they were arguing about a lack of mental health treatment and the excessive use of force by the staff.

Villaneuva understands that a certain threshold of care for mental health is required, and it would be unattainable if the jail were closed. He described how there were several federal monitors that have noted an improvement in jail conditions for the past several years in their communications with a judge.

“We have seen substantial improvement in the Downtown jails … and have noted that progress in our reports to the Federal Court,” monitor Jeffrey Schwartz wrote to the board in a Feb. 7 letter. “We believe that substantially reduced staffing in Custody Operations, particularly at the Sergeant level, will endanger the important positive changes that have been achieved.”