A South Carolina church had three of its 125-year-old windows broken and was vandalized with Islamic graffiti that read, “SUBMIT TO GOD THRU ISLAM” and “MUHAMMED IS HIS PROPHET”.
The mainstream media was completely silent about it.
Trust in the media is at an all-time low, and it should be.

Christians are the most persecuted religious group in the world.
The most persecuted and victimized people in the world today are Christians specifically Christians living in Muslim-majority countries like Pakistan, Syria, Iraq, Egypt, etc.
The media is turning a blind eye to the persecution of Christians all over the world.
No One Trusts the Mainstream Media – They falsely turn opinions into “facts” to brainwash their viewers.
Fewer and fewer Americans trust the mainstream media.
Liberal news channels are doing everything in their power to push the anti-conservative and anti-Trump agenda.

ANDERSON CO., SC (WSPA) – Deputies are looking for the person or persons responsible for vandalizing a church in Anderson County.
(1) 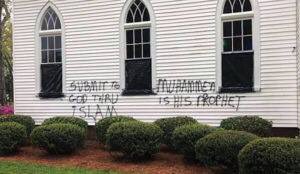 Deputies are looking for the vandals who broke windows and spray painted messages on the side of a church in Anderson County. https://www.wspa.com/news/vandals-spray-paint-messages-break-windows-at-anderson-co-church/1925708015?utm_medium=social&utm_source=twitter_WSPA7 …

Deputies are looking for the person or persons responsible for vandalizing a church in Anderson County.