A man reported a controversial trip to Costco. When he arrived at refrigerated section of the store to choose some cuts of meat for the family, he spotted chicken breasts that were already boneless and vacuum sealed.

He was about to purchase the chicken, when he saw a sign that read “Certified Halal.” Instantly, the man was offended. Halal is the term that means that the meat is lawful to eat for a devout Muslim, but it differs vastly from terms like “Kosher” and here’s why.

For lawful meat in Islam, the animal must be killed while the butcher faces Mecca, and either the butcher cries “Allah Akbar” or a tape plays the words over the loud speaker. The process is one of idol worship.

According to the man, serving the meat in the store is an attempt to force American communities to submit to Sharia law.

“I believe in the freedom of religion. What I am starting to observe, however, is that one religion (currently the minority) is being given a wide berth and allowed special status,” the man wrote. “Those that know their Bible are not surprised by this; we are talking about the religion of the anti-Christ after all. But it still amazes me that it can happen so suddenly and without anyone really taking notice.” 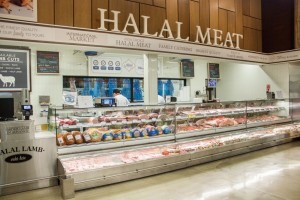 Costco has been contacted for comment regarding the incident but has failed to respond. In the mean time you can’t help but wonder if this story is true or a fabrication. With the Muslim sympathy going on in the world I can’t help but believe there is some level of truth. We will update once more info is found out.

Every day across the country, millions of Americans shop for groceries to feed their families. There are hundreds of stores to choose from, but one of the most popular of stores is Costco since they offer families products in bulk at a lower cost. These low-cost savings help hardworking Americans save thousands of dollars which is incredibly helpful since the cost of living has increased over the last several years. However it was recently discovered that Costco and other stores like it are supporting a devious scheme and are making every American pay for it with their purchases.

With the cost of living skyrocketing, Americans are looking for ways to make ends meet and feed their families without breaking the bank. One of those ways that families do that is by shopping at grocery stores that offer products in bulk which can significantly save people thousands of dollars. Sadly, the liberal agenda has found a way to ruin that too by infiltrating the grocery store market with their push for Islamic domination.

The threat of radical Islam is real even though liberals and the mainstream media would have the public think otherwise. Over the last eight years, Islamic extremists have made their way to our shores and our using our very laws to transform America fundamentally. These radicals have been abusing our freedom of religion to push their dangerous ideology into our public schools, communities, and now our groceries stores.

With the help from insidious leftist politicians, Muslim extremists are working hard to make sure that food offered in stores are Sharia compliant.

And, what makes it worse, is that we are all paying for it.

The president of Halal Choices, Kirralie Smith recently made a video detailing how Islamic groups have convinced food companies to make their products halal compliant and then pass the cost off onto the consumer.

While that information is chilling in itself, what is even more frightening is that there a multitude of other companies in bed with this insidious plot.

In October 2010, news broke about how the Campbell’s Soup company received an Islamic (halal) certification for some of its product line, and many were outraged. There was a legitimate concern – not with the fact that Campbell’s received the certification, but with what organization the certification came from, that being the Islamic Society of North America (ISNA), a group co-founded by Palestinian Islamic Jihad (PIJ) leader Sami al-Arian.

In 2007 and 2008, ISNA was named by the U.S. Justice Department as a co-conspirator for two federal trials dealing with the financing of millions of dollars to Hamas. The defendants of the trials were the leaders of the Holy Land Foundation for Relief and Development (HLF) and HLF itself. In the end, each was found guilty of all charges.

There was good reason for ISNA being named. For years, since HLF was established in 1987 as the Occupied Land Fund (OLF), the group advertised its mailing address as the same one being used (to this day) by ISNA. ISNA’s main youth group, the Muslim Students Association (MSA), asked for donations to be sent to the address in OLF’s name.

This information, along with the backlash Campbell’s received, might have contributed to Campbell’s ending its association with ISNA and becoming the client of another halal group, the Islamic Food and Nutrition Council of America (IFANCA).

However, Campbell’s may have acted too soon, as ISNA has now announced that it and IFANCA have forged an agreement to work together. As was posted this month on ISNA’s site, “ISNA has built an alliance with the Islamic Food and Nutrition Council of America (IFANCA), the largest Halal certifying body in the U.S., for support in establishing the national Halal standards and accreditation body.”

The push to make food products halal friendly in America has quickly spread to almost every major food company in our country including KFC, Whole Foods, Publix, and as previously mentioned Costco. For a complete list of companies that are complying with Islamic demands please visit, Bare Naked Islam’s page.

While some may muse that this is just another way to make money off the Muslim community it could  be one way for Muslim extremists to force Americans to give in to their demands and take over our country once and for all.