A 51-year-old firefighter narrowly escaped death after a flesh-eating bug devoured his leg. The firefighter caught the bug while fighting a ‘nasty fire in a dirty house.’ Tracy Rumble, 51, suddenly began vomiting violently while watching TV at home and quickly went to the hospital.

A firefighter has shared gory photos of the tennis ball-sized hole in his leg that left him out of action for six months – caused by a deadly flesh-eating bug. Father-of-one Tracy Rumble, 51, suddenly began vomiting violently while watching TV and was rushed to hospital by his wife.

Doctors uncovered an excruciatingly painful, red, swollen patch on his lower right leg, diagnosed it as cellulitis and sent him away. But the following day it spread further and Tracy, a fireman of 33 years, returned to the hospital. 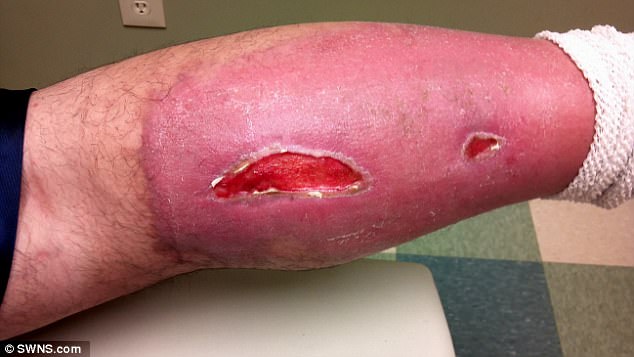 The condition was eventually identified as necrotizing fasciitis – a horrifying bug that can lead to limb loss or death. Surgeons had to scoop out the infected flesh. The 6ft 3ins fire marshall of Greenwood, Indianapolis, believes he may have been struck down after attending the scene of a ‘nasty fire in a dirty house’.

Now Mr. Rumble – who bears a huge scar from the trauma – wants to warn others about the bug and has urged people to get mysterious red marks checked out. 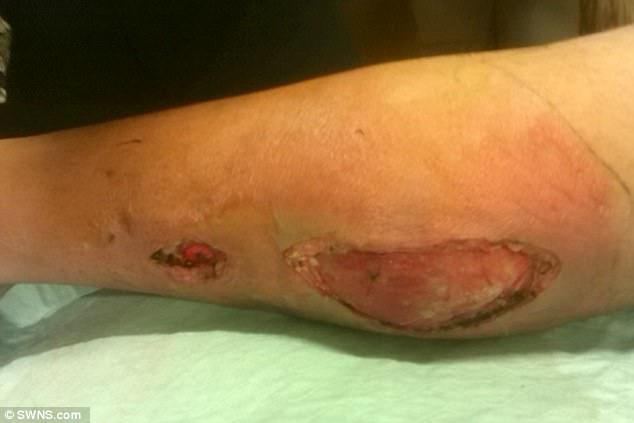 Doctors said it could have been caused by bacteria getting into a cut or an infected hair.

WHAT IS NECROTIZING FASCIITIS?

Necrotizing fasciitis is a bacterial infection that quickly kills surrounding tissue. Once the bacteria enters the body, it can spread to the muscles, nerves, fat and blood cells around the infected site causing damage. Death can occur if it is not stopped quickly enough.
Symptoms:
Pain or soreness
Swelling near wound
Ulcers, blisters or black spots
Fever
Chills
Fatigue
Vomiting
Treatment:

Strong antibiotics are imperative to treating the disease and are typically administrated through an IV. Surgery is recommended when the antibiotics are unable to reach the tissue that has already been infected. This happens when the bacteria has prevented blood flow to those areas. If any of the infection is left in the body after surgery, it can cause organ failure and the patient will die. 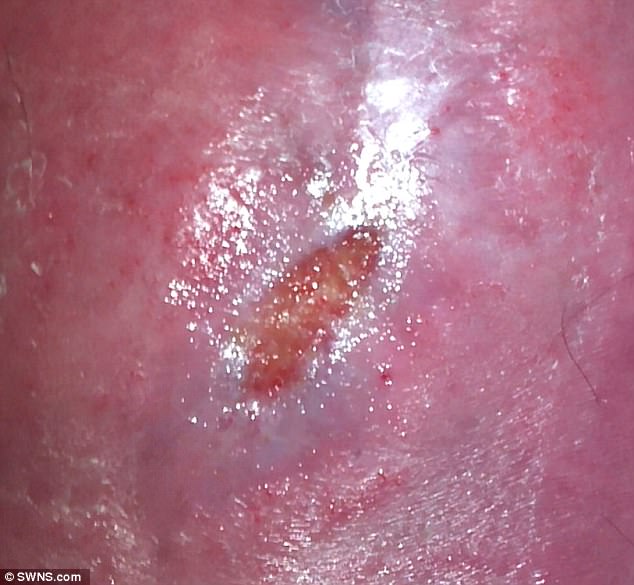 ‘It was creeping up my leg and could have eaten my flesh,’ said Mr. Rumble, father of 12-year-old Tyler.

The first signs of the infection came when Rumble suddenly suffered a fever and vomiting. He then discovered the painful red patch.

‘It was burning hot – I couldn’t even touch it,’ said Rumble.

After medics performed exploratory surgery and removed the infected flesh Mr. Rumble was left with two holes in his leg. However, he was lucky not to have his leg amputated as the bug had eaten through to his muscle.

‘My son could look in and see my muscle moving when I wiggled my toes,’ said Mr. Rumble, ‘the top hole was like a canyon. He called it gross cool.’

Mr. Rumble was in the hospital for nine days before being allowed home after the ordeal in 2011. He kept a wound vacuum dressing on for two months and worked on light duty for six months.

Medics don’t know what caused the bug to spread but believe it may have been down to a cut or scrape on his leg becoming infected. Rumble thinks he may have become infected while investigating a dirty house when he was working as a fire marshall at Greenwood Fire Department. ‘I wear uniform pants but somehow it must have got under those,’ said Rumble.

‘If people have red marks they need to go get them checked out otherwise they could end up losing a leg,’ said Rumble. ‘To think it was eating my flesh is gross. Something so small can do so much damage.’

Fortunately, it looks like Mr. Rumble will be just fine but he will never forget the ordeal. Firefighters risk their lives everyday and we often forget that fire is not the only hazard these heroes face.