People are amazing. Their bodies can handle all kinds of abuse without complaint. Ask any ER clinic, they will be happy to tell you that a small but consistent percentage of their work involves removing things from people’s bodies that should never have been there in the first place.

The 10 people on our list, however, have far exceeded the coin swallowing toddler. The things that they managed to put inside themselves will blow your mind. They’ll also make you very glad indeed that you don’t work as a surgeon. This is what those guys have to put up with to earn their pay and it’s not pretty.

10. An Eel Which Was Eating A Man’s Intestines 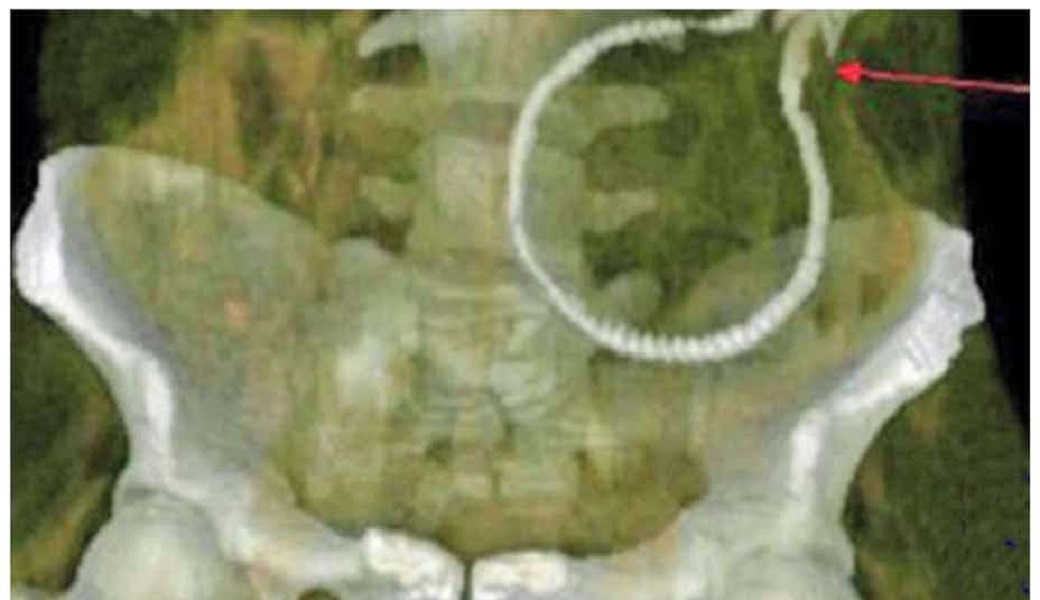 Sure, worms and flukes are all in a day’s work for the medical profession, but eels?

Surgeons in Guangdong in China x-rayed a man complaining of pain in the abdomen. They’d assumed it was an appendix problem but it turned out to be a live eel. The man had been reenacting a scene from an adult movie and lost the eel up there.

The eel had been there so long that it started eating his intestines.

9. The Lawyer’s Smartphone Stuck In His Rectum 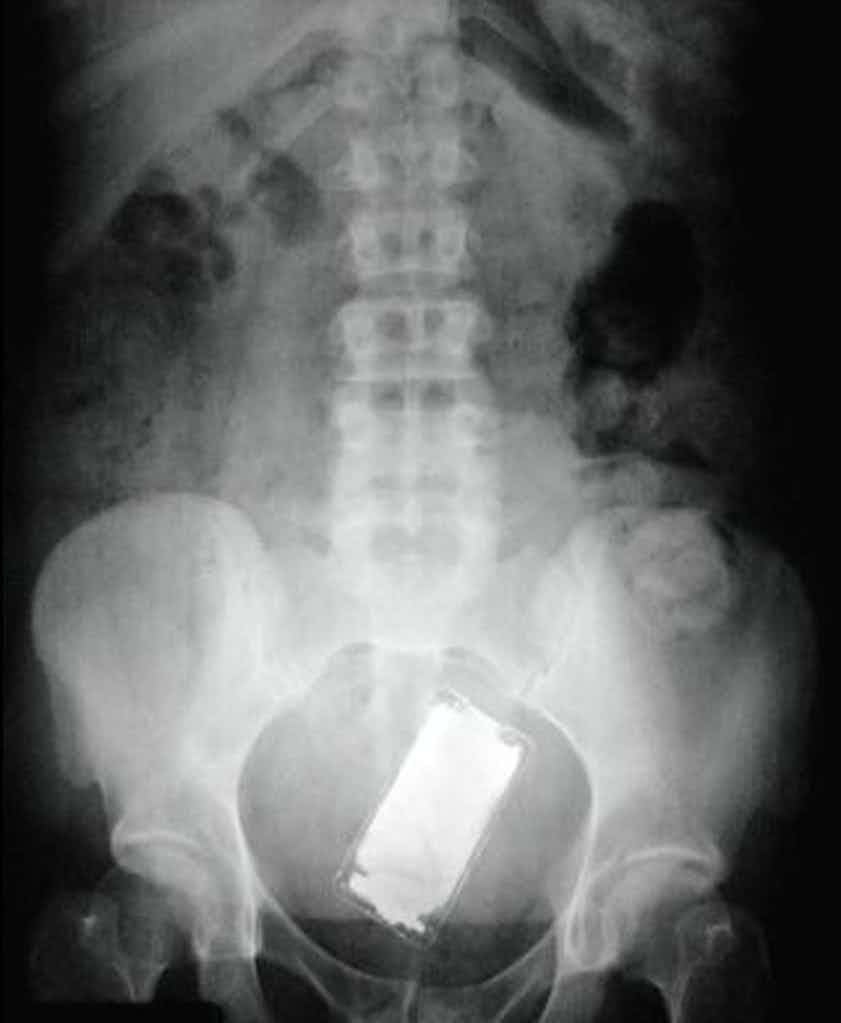 We imagine that doctors hear this all the time when it comes to things found in people’s rectums, “I was showering and then I slipped and fell on something and it went inside me.”

That was the lawyer’s pitiful excuse when he arrived in a Georgia hospital with a smartphone inside him. Because we all shower with our phones, right?

8. The Tree Blossoming In Someone’s Lung 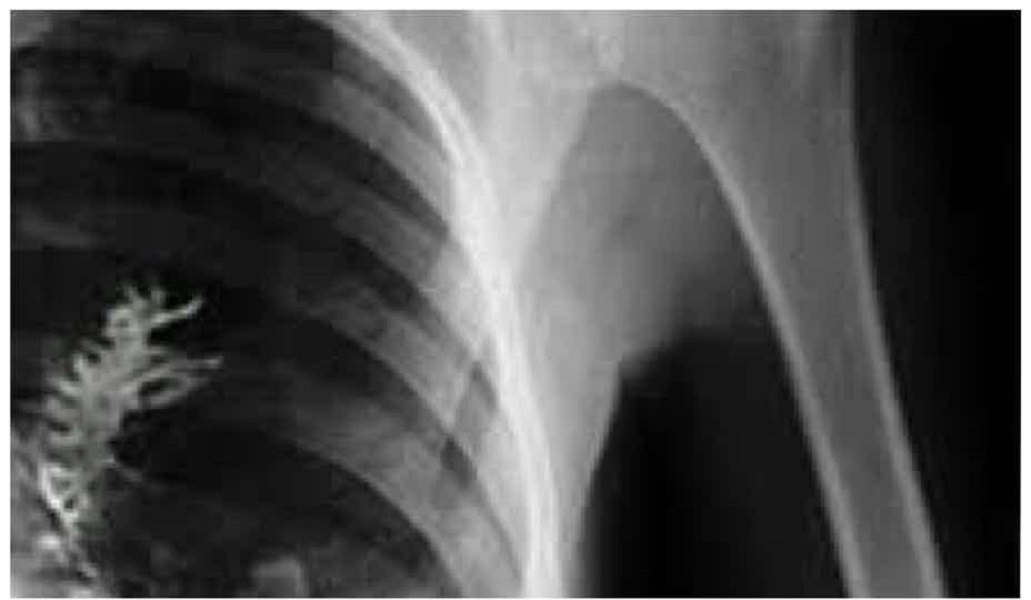 Russian Artyom Sidorkin did the sensible thing when he started coughing up blood – he went to the hospital. There, his amazed doctors discovered that instead of a life threatening condition, he had a tree growing in his lung.

They speculate he must have inhaled the seed and it got trapped and germinated.

Think that’s gross? Wait until you see number 5 on this list.

7. The Bomb In The Soldier 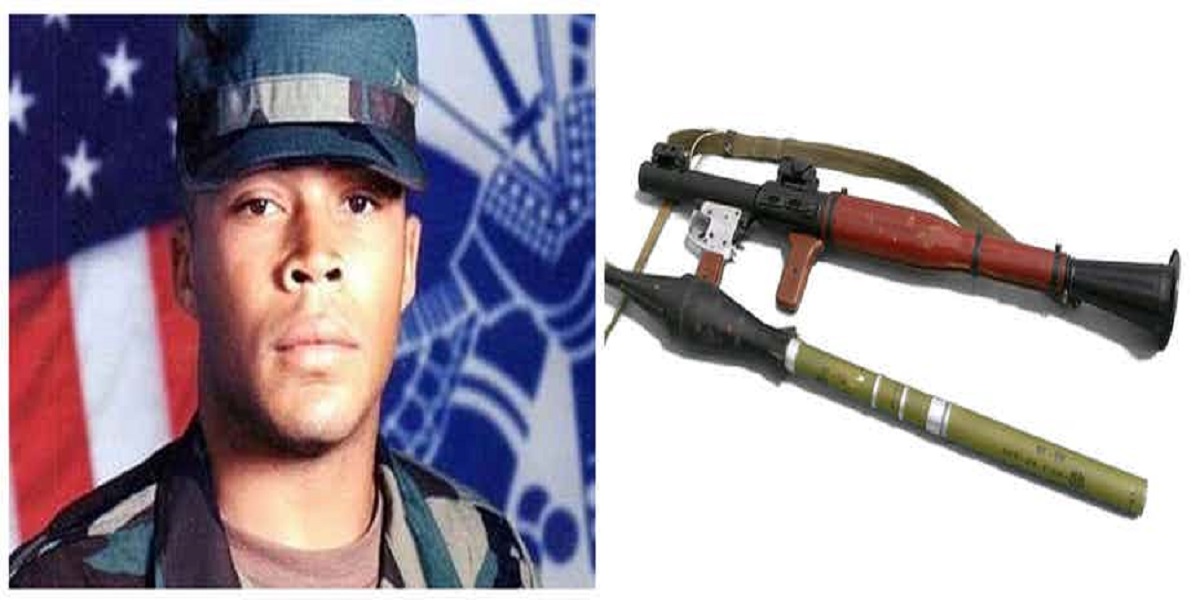 This sounds like a punchline from an awful joke, but Private Channing Moss who served in Afghanistan wasn’t laughing at the time. He was evacuated by helicopter after being hit by a rocket-propelled grenade which didn’t detonate.

Surgery was a very delicate affair as doctors removed the grenade and tried not to kill themselves or their patient. 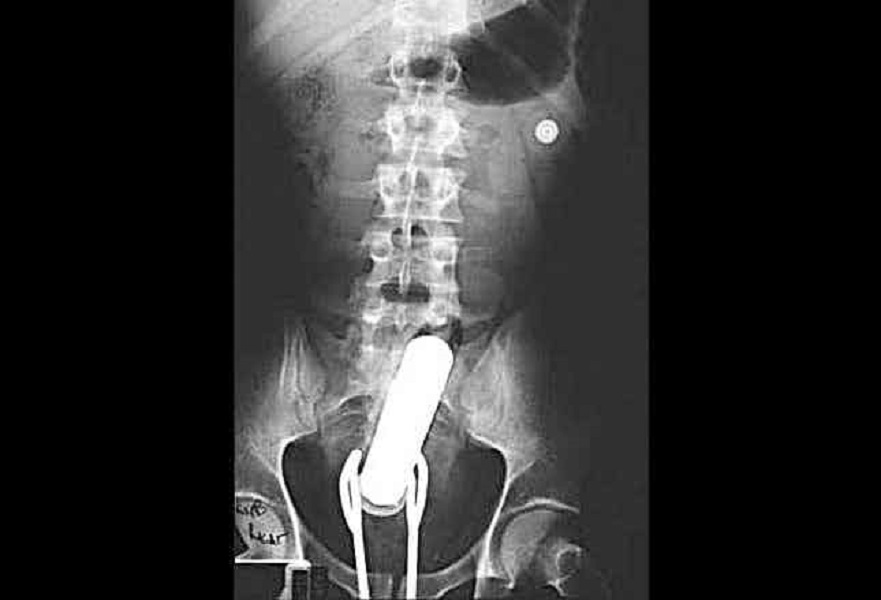 That’s not nice, but wait until you find out about the stone baby. 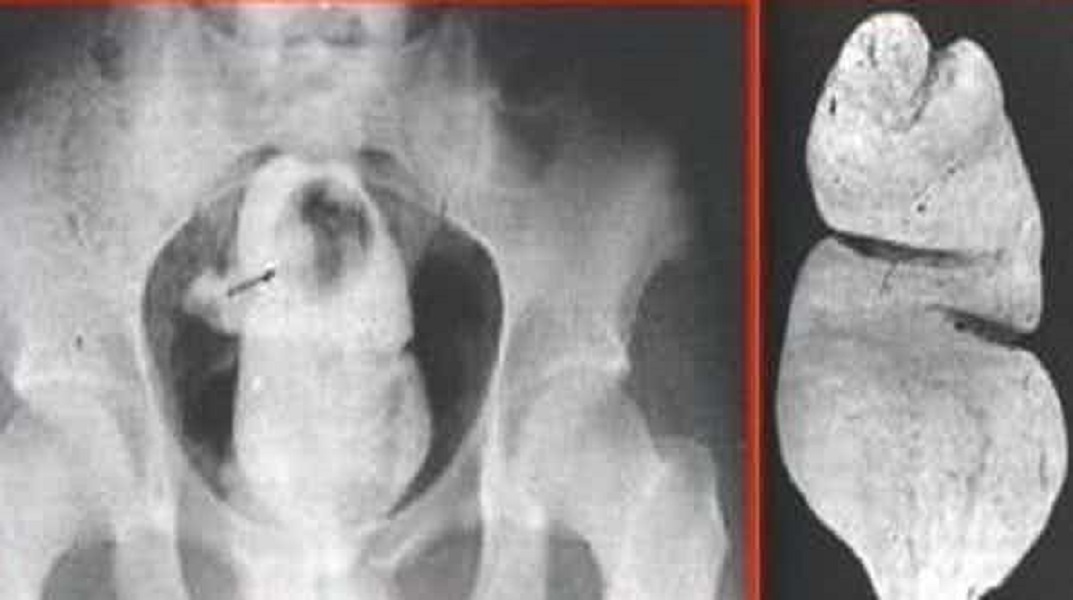 This may take a prize for complete stupidity. A gay couple decided to spice up their love life and turned to enemas to add something new. They had watched 50 Shades of Grey in which a little chili powder is used to make the whole thing burn.

They had no chili. So, they used cement instead. The cement set inside him and nearly ripped through his lower body. This is a really bad idea. Do not try this at home.

4. The Grandmother Whose Baby Was Made Of Stone 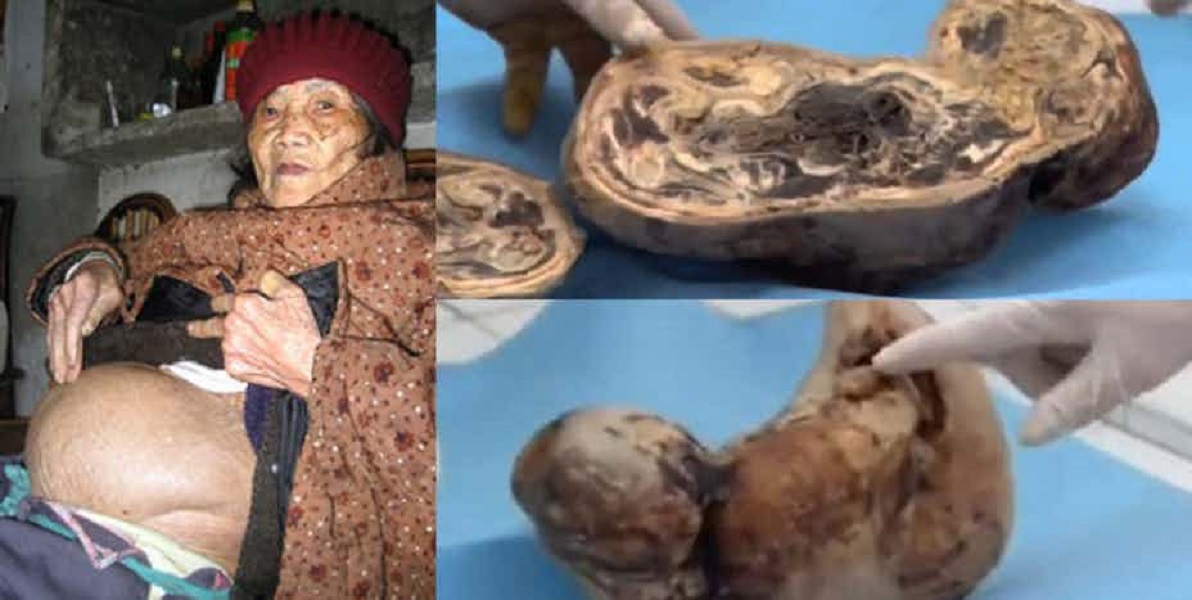 This is quite bizarre, but Huang Yijun, 92, from China waited more than 60 years to give birth. What she didn’t know was that she suffered from lithopedia. That’s where the fertilized egg is stuck to the outside wall of the uterus rather than inside it.

Over time, her body began to calcify the fetus. It was delivered after a chance visit to the hospital in an emergency where a doctor offered to treat her for free.

As a Chinese peasant, she’d never been able to afford medical treatment up until that point.

3. 78 Items From The Cutlery Drawer In One Woman 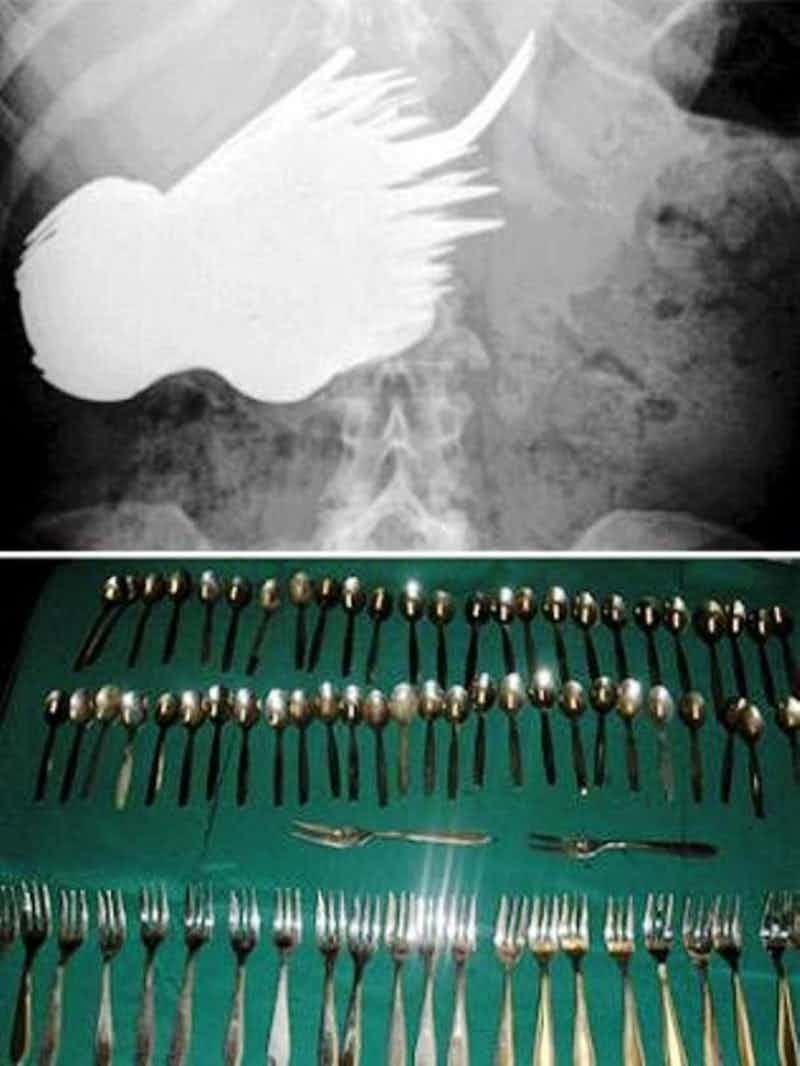 After some items on this list, you’d probably believe somebody could accidentally swallow a piece of silverware, but 78 times is pushing it.

That’s what Margaret Daalman claimed when she visited surgeons in Rotterdam. She was diagnosed as mentally ill, but has refused treatment for her illness, so it’s possible she’ll be back under the knife again one day.

If you found that interesting, you’ll find number one on this list truly illuminating.

2. The 4-Kilo Hairball That Filled An Entire Stomach 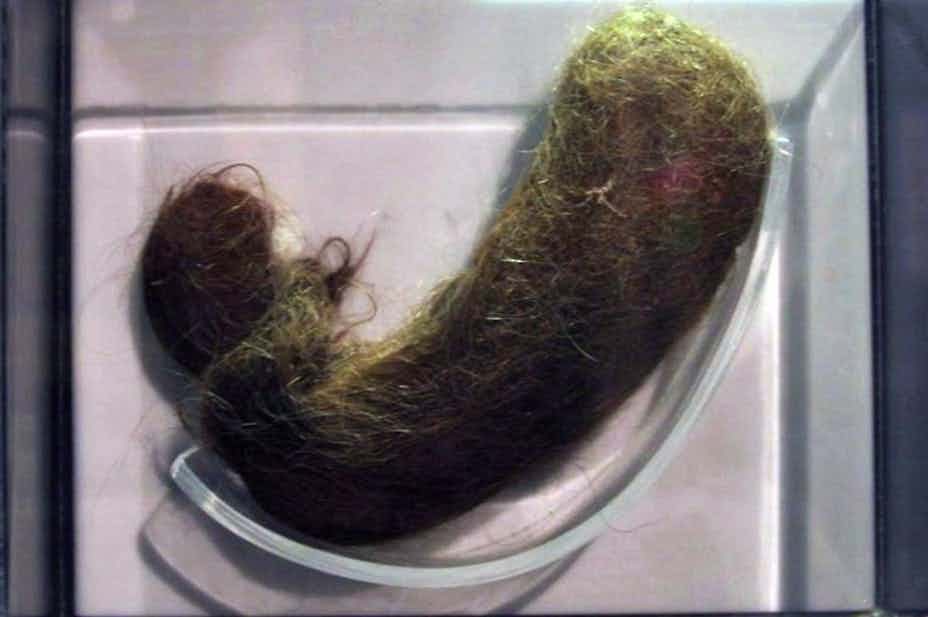 An 18-year-old visited doctors in Kyrgyzstan because she couldn’t eat or drink without vomiting. They opened her up to find a 4-kilo hairball which practically filled her whole stomach.

She suffered from a rare disorder, trichophagia, which compels people to eat their own hair. Hair doesn’t break down in the stomach.

1. The Light Bulb Inside Mohammad 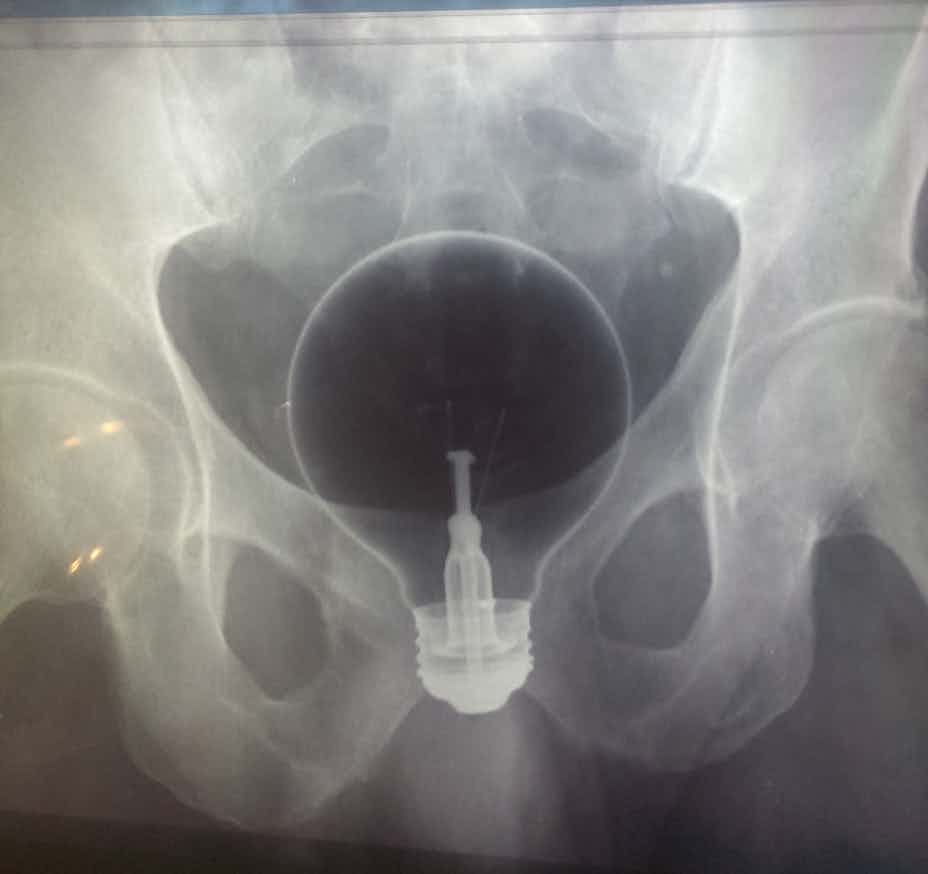 Fateh Mohammad was not the brightest of bulbs himself. He made his living as a smuggler and when he went to jail for bootlegging, he found himself in terrible pain. When they took him to the hospital, they found a light bulb hidden in his rectum. He was lucky it hadn’t shattered. It took more than 90 minutes to remove it.

It’s quite incredible what can go inside a human being without killing them. Of course, not every one of these was someone’s fault – a peasant can’t help having a problem with her unborn child and a soldier can’t avoid being attacked in Afghanistan, but it does blow our minds how many of these issues are self-inflicted.

So please, don’t put anything in your body that doesn’t belong there and if you think you might, maybe talk to a medical professional first?

Please share this with your family and friends on social media so that they can be more aware of the problems doctors face!