‘GANG RAPED’ AT SCHOOL The girl said after she was first attacked news spread around the school about what had happened and then other male students started to approach her.

A 14-YEAR-OLD schoolgirl claims she was forced to have sex with three different boys in her school toilet – including one who is HIV-positive. The girl said after she was first attacked news spread around the school about what had happened and then other male students started to approach her. She told local news station WSVN: “The third time, it was after school, and I was supposed to stay after school for math, for math tutoring, and there was a guy asking me if I could go to the restroom with him.” In a student statement she gave to the school, she describes how she couldn’t breathe, and was “choking and crying”. But in response to her account, the school not only suspended the boys involved, but also her. 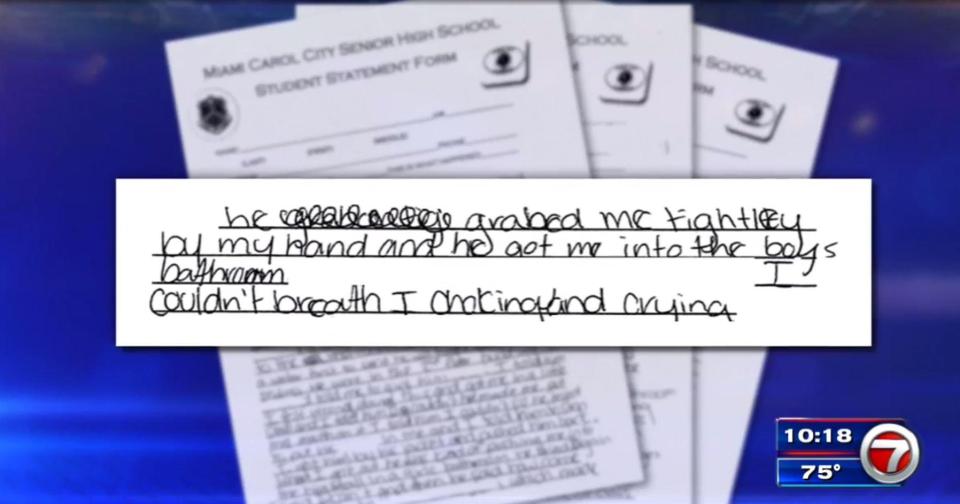 In a statement she gave to the school, the teen recounted her terrifying experience

The girl’s mum alleges that the school deemed the incident consensual, because she didn’t scream or run away. The horrific incident took an even more shocking turn when the girl and her mum discovered that one of the boys was HIV-positive. At just 14, the girl’s doctors have already started her on medication for HIV, although they won’t know for certain whether she has contracted the disease for another year. The devastated mum said: “She’s only 14 years old. “How do you explain to your 14-year-old that she’s gonna have something that she can’t get a cure for?”The teen is now receiving therapy, and is too traumatised to return to the high school, but her mum said they are finding it difficult to convince the school district to let her transfer to another institution. She said: “I’m getting therapy, and you know, I can’t sleep at night sometimes, and I really hope this doesn’t happen to any other girl. “This shouldn’t happen to any other girl or boy.” The school district said their investigation is ongoing, adding in a statement: “School district administrators in conjunction with Miami-Dade Schools Police are investigating this case thoroughly, and it continues to be an active investigation. Information regarding the case has been provided to the State Attorney’s Office, as well as the Department of Children and Families (DCF).” Read more: Sun.UK