Nebraska officers arrested a couple in their eighties after finding 60 pounds of marijuana in their truck during a traffic stop, according to the York County Sheriff’s Department.

Deputies pulled over 80-year-old Patrick Jiron and 83-year-old Barbara Jiron, both of Clearlake Oaks, California, after they noticed the couples’ vehicle crossing the center line and the driver turning without signaling, according to the York News-Times. 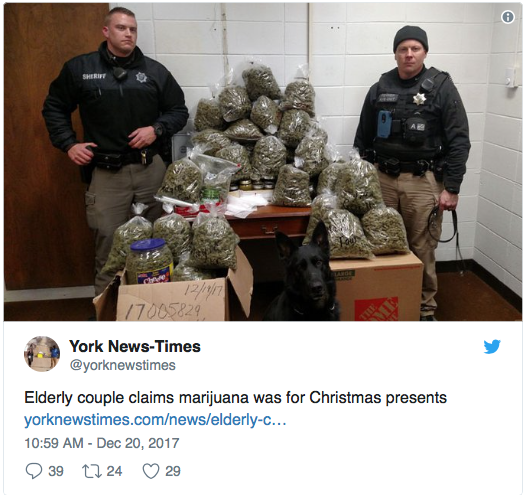 A strong smell of marijuana wafted from the Toyota Tacoma, and, with the help of a police dog, deputies found the roughly $330,000 worth of pot in the pickup, authorities said.

While being questioned, the couple told deputies they were headed to Vermont, and “the marijuana was for Christmas presents,” according to a police report.

Deputies took Patrick and Barbara Jiron into custody on felony charges of possession of marijuana with the intent to deliver and no drug stamp, according to the paper.

YORK – The 83-year-old woman, the second defendant in a case where she and her 80-year-old husband were allegedly transporting $336,000 worth of marijuana they said was intended as Christmas gifts, has not been jailed.

York County Sheriff’s Lt. Paul Vrbka said Barbara Jiron was cited in the case but was not jailed “due to some medical issues.”

Her husband, Patrick Jiron, was taken into custody and booked into the York County Jail on charges of possession of marijuana with the intent to deliver and having no drug tax stamp. 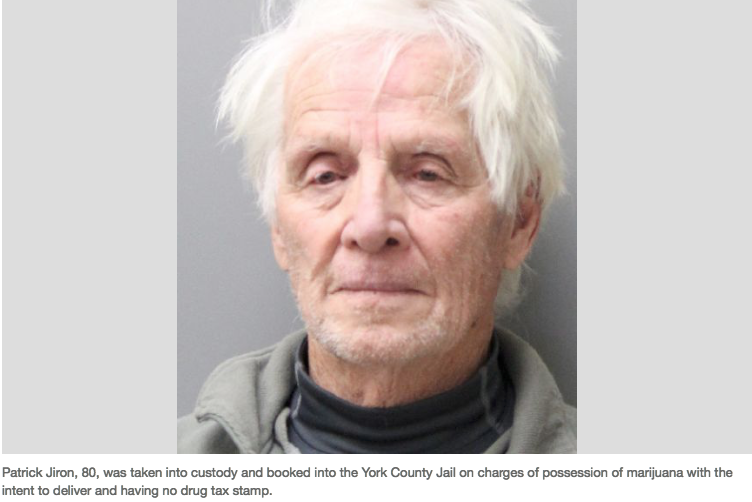 This case began on Tuesday when deputies with the York County Sheriff’s Department stopped the Jirons’ Toyota Tacoma on Interstate 80, near the Bradshaw exit, after they allegedly saw the vehicle going over the center line and the driver failing to signal.

Lt. Vrbka said when they initiated the traffic stop, deputies could immediately smell the strong odor of raw marijuana. Dundee, the county’s drug dog, alerted to the presence of a controlled substance and a search was conducted.

Lt. Vrbka said the Jirons acknowledged that the marijuana was in the back of the pickup, under a topper, and deputies found 60 pounds of marijuana inside boxes. Because the marijuana was such high grade, the street value was equally high.

The couple told investigators, according to Lt. Vrbka, that they were traveling from California to Vermont and they intended to give away the marijuana as Christmas presents.

Vrbka said they also told deputies “they didn’t know it was illegal to transport marijuana in Nebraska.”

Click HERE to read the original article about this situation