Honest, hard-working people run this economy. Without taxpayers, America would crumble. But taxpayers often feel like they’re not getting the respect that they deserve. Often, hard-working people are neighbors with others who don’t seem to carry their weight. These people, who are able-bodied, simply collect welfare and other freebies from the government. No wonder so many people are feeling resentful in America these days. Trump plans to wage war on welfare recipients next.

But drug dealers hurt otherwise great neighborhoods and communities. Besides dealing with black market illegal sales that are never taxed, drug dealers also are more likely to get involved in violent crimes. Neighbors are at risk of getting mugged or robbed. Parents do not feel that their children are safe. A driver under the influence of a recently sold drug could come careening down the road at dangerous speeds. Or the drug dealer could try to entice a child to try drugs so that they can get a new customer.

One town had a problem with a drug dealer known as the “candy man.” The criminal would drive around in his large, expensive truck to show off what his drug money had bought. Police kept trying to take him down, but he was always a step ahead of the cops. They were able to nab his cronies, but the candy man still went free.

But criminals can evade justice only temporarily. Eventually, crime catches up with the criminal and the consequences of all their lies and vile acts come to a head.

The police eventually caught the candy man and threw him behind bars. And for the drug dealer’s fancy truck? Now the police own it and they’re flaunting it to all the other would-be drug dealers and criminals who think they can get ahead in life with unlawful activities. It now serves as a reminder that drug dealers and other people who resort to crime will always be on the run from the law until it finally catches up with them.
Police must confiscate possessions used as part of a crime. Many of these things get sold at auction to pay for legal fees and other things. But sometimes police departments can put a vehicle to better use.

And that’s what they did with the candy man’s luxury truck.

In the candy man’s town, the police now use his drug truck fighting drug dealers and other criminals.

To drive this point home, the local police have posted a sign in the back of the truck that reads: 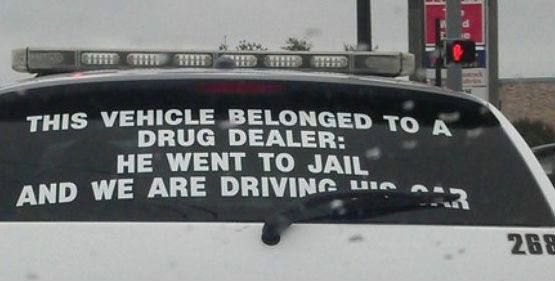 The law-abiding citizens loved the message. They were glad to know that their police officers were successful at taking criminals off their streets. They felt safer reading that message.

This is not the only message like this. Others have been spotted in other parts of the country including in Myrtle Beach, South Carolina. Lawful citizens do not like drug dealers.