Reported by AL Wiseman from FreedomDaily

A photo of President Donald Trump’s newborn grandson sitting behind the resolute desk at the Oval Office has sparked some truly baffling backlash from social media users this morning.

President Donald Trump’s younger son, Eric Trump, took his newborn son, Luke Trump, for a visit to the White House earlier this week. While they were there he sat the child down on the president’s red leather chair behind the resolute desk in the Oval Office. Which seems logical since the boy looks just like the President, even his hair. Eric then proceeded to snap a picture of Luke and shared it on twitter.

Luke is seen wearing a light blue outfit while trying to just barely peek over the president’s desk in front of him. 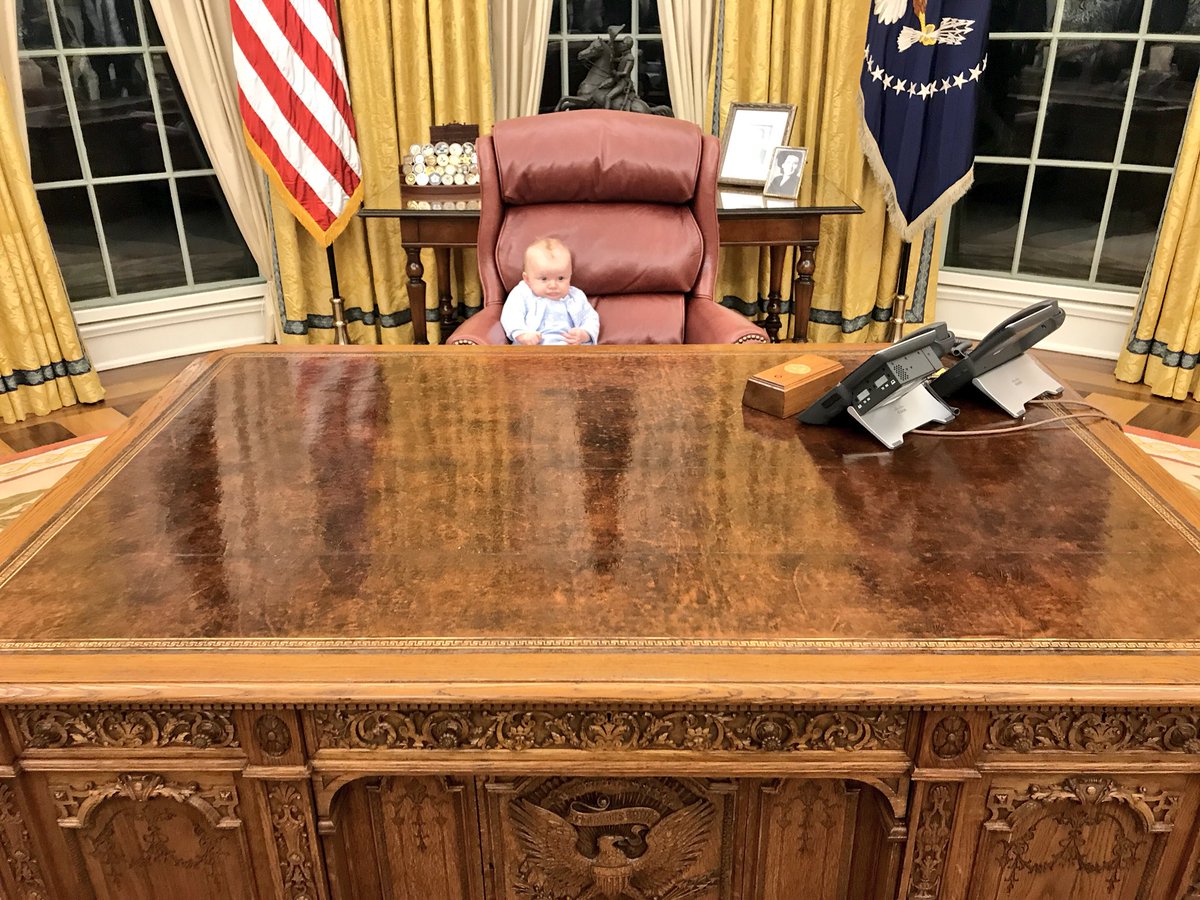 All this is super cute and harmless. But of course, the left wing social media keyboard commandos have to spoil it by saying it degrades the office of the president of the United States.

Really Liberals? You guys really want to go there? Do you really want me to take you on a stroll down memory lane? Fine, Let’s stroll away!

Who can forget the many times former President Barack Hussein Obama put his dirty nasty feet on the Resolute desk?

Yup, And forget Obama’s feet on the desk, I can provide even more serious offenses Democrat Presidents have done in the Oval Office.

The President and Monica Lewinsky

Monica Lewinsky came to Washington in July 1995 to work as a White House intern at age 21, newly graduated from Lewis and Clark College in Portland. In her first few months on the job, the aggressive and sexually experienced Lewinsky met and flirted with the President, but no opportunities for close personal contact arose. In November 1995, however, Lewinsky was assigned to the West Wing and she soon found herself alone with Clinton. He asked if he could kiss Lewinsky. She quickly consented. Later that evening, the two would have the first of what eventually would be ten sexual encounters over a sixteen-month period. After eight of the encounters had taken place, in April 1996, Clinton’s deputy chief of staff–most likely aware of the threat the young intern posed–reassigned Lewinsky to the a position in the Department of Defense. The following month Clinton told a disappointed Lewinsky (“He was my sunshine,” she later told a grand jury) he was ending the relationship, but he revived it briefly in early 1997.

The encounters followed a predictable pattern. Generally they occurred on weekend mornings in and around the Oval Office (including a study, a hallway, and a bathroom), when few people except Clinton’s personal secretary, Betty Currie, would be around the West Wing. Although many private meetings between the two involved no sexual activity, when they did they generally included Lewinsky fellating the President and the President fondling her breasts and genitalia. On three occasions, Lewinsky performed oral sex while the President talked on the phone. Lewinsky told Clinton she would like to have vaginal intercourse with him, but he resisted. He also terminated the oral sex sessions before ejaculation until their last two encounters.

When Clinton again told Lewinsky in May 1997 that their sexual relationship was over, she redoubled efforts that began the previous year to enlist the President’s assistance in finding employment. Lewinsky received a job offer from U. N. Ambassador Bill Richardson several months later, but she turned it down, preferring to find private sector employment. Clinton golfing buddy and power broker Vernon Jordan, acting at what he presumed to be the President’s request through Betty Currie, met with Lewinsky to discuss employment possibilities in November 1997.

Less than two weeks after Lewinsky’s name appeared on the Jones deposition list, Clinton told her the news. He advised her that filing an affidavit might avoid the necessity of a deposition (but only, he need hardly have said, if she denied a sexual relationship), and he reminded her of their “cover story” for her frequent trips to Oval Office–that she was just delivering documents. Two days after discussing the matter with Clinton, Lewinsky received a subpoena to appear for a deposition in January 1998. She called Vernon Jordan, who again met with her and referred her to an attorney, who proceeded to draft an affidavit that reflected her denial of any sexual involvement with the President.

Just after Christmas, Lewinsky spoke again with Clinton, raising her concern that the subpoena had requested that she bring to the deposition any gifts–and there were many–that she had received from him. Although Clinton apparently informed Lewinsky that she was obligated to give the lawyers for Jones any gifts in her possession, a call came later that day from Currie, indicating that she understood Lewinsky had some items she’d like to give her for safekeeping. (Currie, in her testimony, disagreed with Lewinsky’s version of events and claimed that the call about the presents came from Lewinsky, not her.) Currie drove to Lewinsky’s home and carted away a box of Clinton gifts and put them under her bed.

In early January 1998, Lewinsky signed an affidavit, with the intent of filing it for the Jones case, claiming her relationship with the President was non-sexual. The day after Lewinsky showed the affidavit to Vernon Jordan, Jordan made a call to Ronald Perelman, a friend and member of the Board of Directors of Revlon, encouraging him to hire Lewinsky. The job offer from Revlon came just two days later.

Who can forget the nine times former President Bill Clinton and Monica Lewinsky had oral sex in the oval office, ON THE RESOLUTE DESK!

So you see Liberals, if you want to be outraged about a newborn child sitting on the president’s desk you are welcomed to be, but I would keep quiet if I were you, because if you want to go there, we have a lot many places to go.