A student in Brazil may quite possibly have the worst name someone could have on the planet — Guilherme Carabagiale Fuck. Yes, you read that correctly.

He is currently playing basketball in Canada and insists that his last name is pronounced “Foo-kee,” but the spelling is undeniably tragic. The surname comes from his German heritage, and, while there’s a lot of humor behind his name, Fuck says he’s not ashamed of it.

To avoid problems, Medicine Hat College in Alberta, Canada, decided with the basketball player that they would use his first last name, Carabagiale, but now, the team has decided to support Fuck in wanting to use his real last name. 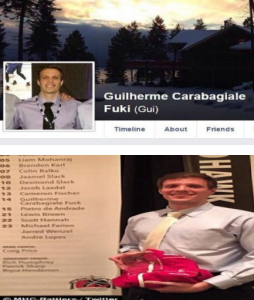 “In a lot of ways, at the beginning we were just going to avoid any confusion or any potential issues, whereas now we’re at the point of, this is the guy’s name, he’s an all-Canadian,” Medicine Hat College Rattlers Coach Craig Price said. “We shouldn’t be avoiding it, he’s proud of being a Rattler and we want to support him. I think he takes great pride in his heritage, in where he comes from, and technically in what his name is.”

Fuck, who is over 6-and-a-half feet tall, avoids issues on social media by spelling his name “Fuki,” but for his team and public persona, he says he wants to avoid hiding the name he was given.