Americans are always on the go which is why fast food is so popular in our country. Of all the choices in fast food, there is one company that stands out. McDonald’s has been around longer than any of its competitors and has had a pretty good run, but as popular as McDonald’s is, it is also one of the unhealthiest places to eat.

The standard American diet — in which 62 percent of calories come from processed foods, 25 percent from animal products and only 5 percent from fruits and vegetables — is nothing less than a health travesty. Our fast-food culture has produced a population with widespread chronic illness and is a primary reason that health care costs are taking a devastating toll on just about everyone.

The annual health insurance premiums paid by the average American family now exceed the gross yearly income of a full-time minimum wage worker. Every 30 seconds, someone in the U.S. files for bankruptcy due to the costs of treating a health problem. Starbucks spends more on the health insurance of its workers than it does on coffee.

According to a Reddit discussion among past and former fast-food chain workers, the fishy treat is the one item on the menu you should never order. As it’s never as popular as a burger and fries, there’s a good chance your fish sandwich will not be freshly cooked, with one McDonald’s worker claiming your order could have been sitting in a ‘heated cabinet for hours’.

They advised customers to ask for their Filet-O-Fish to be prepared there and then to ensure you’re not being served food that’s been slowly congealing. A spokesperson for McDonald’s told MailOnline: ‘While we always strive to freshly prepare orders, for customer convenience, there are times – such as during peak hours – when we prepare some ingredients in advance. 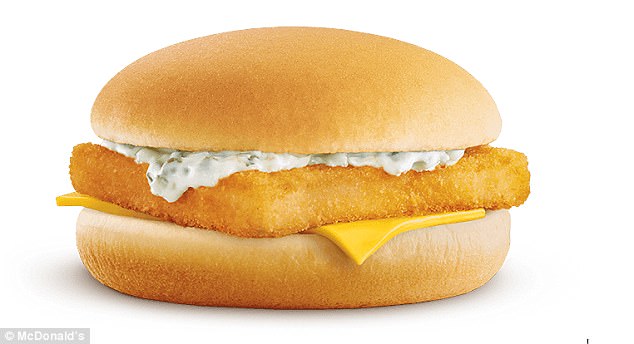 ‘Our Filet-O-Fish – which uses solely Marine Stewardship Council (MSC)-certified wild-caught Alaska Pollock – continues to be a customer favorite around the world.’

Another added that they worked at McDonald’s three years ago and that the Filet is ‘not fresh by any stretch of the imagination’. However, one fan of the fast-food chain said that they’re not actually troubled by the fact that their ‘go-to comfort food’ isn’t fresh.

‘I feel like that is the social contract I make with McDonald’s whenever I order the Filet,’ the y wrote.

‘If you are going to serve me a square piece of fish that tastes the exact same in Denver or the south of France I am under no assumption that it is by any means fresh.

Previously fast-food workers have taken to Reddit to warn against order Subway’s ‘oven roasted chicken’, which one claimed was actually ‘boiled in a microwave.’

‘All Starbucks food is reheated frozen food,’ another said. ‘Ridiculous how little people realize that. Doesn’t mean it doesn’t taste good, it’s just not fresh at all and incredibly overpriced.’

One convenience store worker wrote: ‘I’m gonna say any of the taquitos or hotdogs around midnight, up through about 4 or 5 AM. around midnight you can be almost assured that these are now high-mileage.’

While convenient, fast-food is incredibly unhealthy and should only be eaten in small doses. Unfortunately in this day and age many times we have no choice but to make a quick stop but if you do decide to stop at McDonalds, at least now you know what to steer clear of.