A heartbroken mother shared a tragic photo of her of her brain-damaged son after he ‘died’ for ten minutes when he hung himself in an attempt on his own life. The mother, Helen Barnes claims her son was found hanging in the woods by police who quickly performed CPR on the 19-year-old. He was then rushed to the hospital and was put into an induced coma for 2 weeks. Helen quit her job to take care of her son after the incident and decided to share her son’s photo in an attempt to make more people aware.

Jack was diagnosed with borderline personality disorder at the age of 15 but after three years of monthly group therapy he appeared to turn a corner and went back to college. 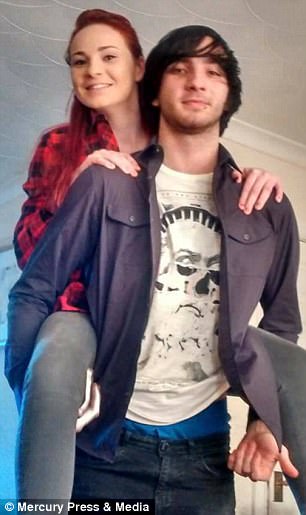 As it was out of character for Jack to leave home alone, Ms Barnes called Dyfed Powys Police and the teen’s lifeless body was found hanging in a woodland at around 10:30 pm. 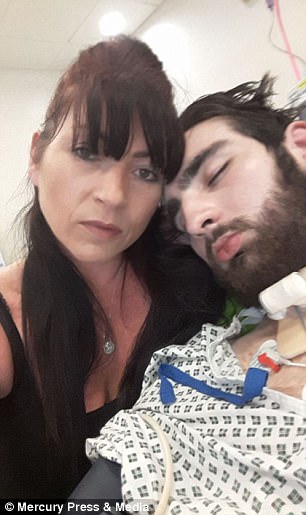 The former support worker, of Pembroke Dock, Pembrokeshire, said: ‘As soon as I got that text from Jack, I knew something was wrong.

‘He never just popped out or put kisses in his texts. I didn’t want to overreact because he had been doing so well so I called the police non-emergency line.

‘But knowing his mental health problems, they raised it as an emergency. They then found him in a woodland.

‘The first officer cut him down and started doing CPR. I could never thank her enough, she saved my son’s life. 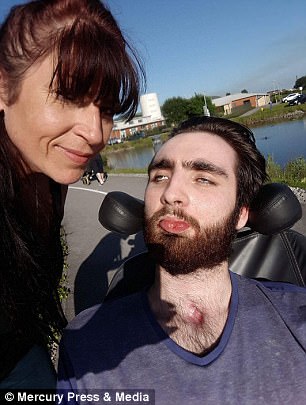 ‘The police took me and Jack’s twin sister Lucy to the hospital and when the doctors told us Jack had hung himself I passed out from the shock. Lucy told me she heard my head ricochet off the hospital floor.

‘When I came too, I thought that was it, I thought I’d lost Jack. And I felt like a complete failure that I hadn’t called 999. He had just been so great for so long.

‘No mother should have to see their child in intensive care, hooked up to all those machines. It was absolutely heartbreaking. 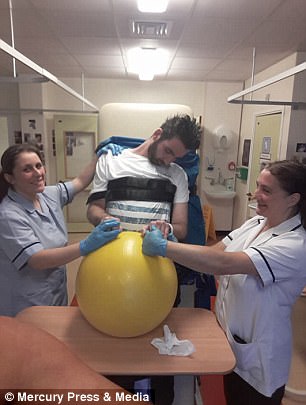 ‘And after the pain of having to accept that my son wanted to die and spending every day at his bedside praying that he wouldn’t, we found out he will live but with no quality of life. It was devastating.

‘Jack’s body was deprived of oxygen for so long that he will be in a vegetative state for the rest of his life.

‘He will never eat again, speak again, he will never have a girlfriend, get married, have kids or have any independence. To know that as his mum is awful, every day is a battle to keep going.

‘We have always had this saying in our house that ‘mum’s hugs fix everything’ but they won’t fix this, no matter how hard I try.’

After his suicide attempt, Jack remained in intensive care at Withybush Hsopital in Haverfordwest, Pembrokeshire, until June 1 when he was transferred to a neuro rehab unit at Neath Port Talbot Hospital in Wales. 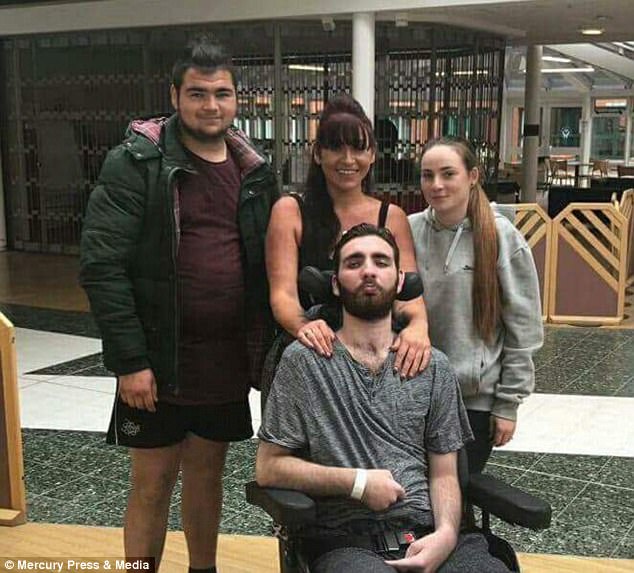 At the rehab centre Jack has received ‘brilliant’ care and support with daily physiotherapy and speech therapy sessions.

Jack is also due to have surgery on his mouth as he has lost control of his jaw and often bites down on his own lip – once so hard he lost a tooth.

Although he will never be able to verbally communicate again, the doctors hope Jack will one day be able to operate a switch on a communication device and electric wheelchair.

Eventually, Ms Barnes’ house will be adapted so that Jack can move back home and the mum has set up a gofundme page called Jack’s Fund to raise money to buy special sensory equipment for her son.

But the teen’s progress is very slow and in almost eight months Jack can only just move his hands from an armrest into his lap and blink once for ‘no’ and twice for ‘yes’.

Ms Barnes’ revealed that when she asks Jack now if he still wants to die, her son will blink twice – something she fears will never change.

She said: ‘So much has happened. Jack spent two weeks on a breathing machine, he had to have a tracheostomy, he has fought off sepsis, he has developed epilepsy.

‘The only reason he has survived is because he is so young and has a strong heart but he’s still got a lot more to go through. 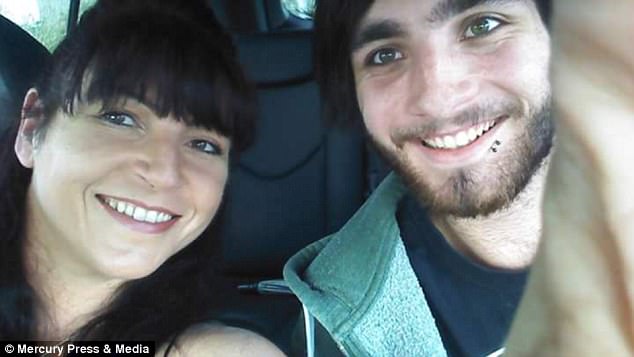 ‘It is horrendous to see him like this. He doesn’t need to be able to speak for me to see that he’s in pain. I’m so frightened that him wanting to die will never change.

‘The care and support we have had has been brilliant. And as much as I can’t wait to bring him home, the idea of not having that support around is scary.

‘Jack will live with me until the day I die. Thinking about what will happen after that is terrifying.’

Jack started to develop anger management issues at the age of 13 and over the next two years the outbursts spiralled out of control.

He would take out his rage by trashing rooms, cutting himself and punching walls to purposely break his hands.

But when Jack wasn’t in a fit of rage, he was a loving and shy son and brother to his twin sister Lucy, 19, and brother Jordan Arthur, 16.

After his first suicide attempt at the age of 15, Jack received dialectical behaviour therapy, a type of talking treatment.

And by the age of 18, Jack appeared to have battled his demons, studying electrical installation and making plans to travel the world and do an apprenticeship. 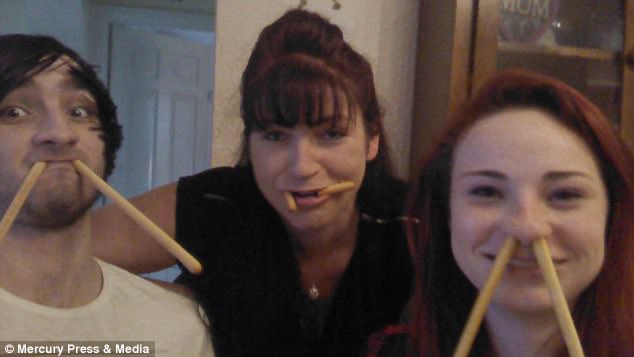 But for reasons his mother and siblings will never truly know, the teen decided to hang himself – a tragedy that has had a catastrophic impact on him and his family.

Ms Barnes said: ‘Jack’s outbursts were terrifying. I remember the first time I got a call from his school to say he’d punched a wall I just thought ‘that’s not my Jack’. It was so unlike him.

‘He is so loving and caring. While his twin sister is a social butterfly Jack is very insular. He has a small group of friends but he’d rather shut himself away in his room to play Xbox than go out. 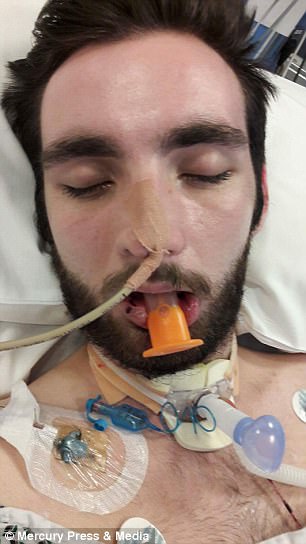 ‘But when he has one of his meltdowns he would trash his room, cut himself, put his fist through walls and windows.

‘We will never know the reason Jack did what he did. It has taken its toll on all of us. It has been horrendous but we can’t go back now.

‘I just hope that by sharing his story, I can encourage people to talk more about their mental health and stop other kids going through what Jack has.’ 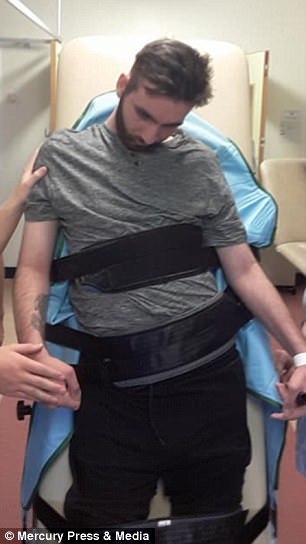 A Heddlu Defyd Powys Police spokeswoman said: ‘Concerns were raised for an individual’s welfare at around 10.30pm on Saturday, March 4 2017.

‘Officers located an 18-year-old male in Saundersfoot and he was taken to hospital.’

Abertawe Bro Morgannwg University Health Board, who are responsible for Neath Port Talbolt Hospital, could not comment on an individual case.

A spokeswoman said: ‘While we cannot comment on specific cases we are always happy to receive feedback from families.’

It was an incredibly brave thing to do what Helen Barnes did by sharing those heartbreaking photographs of her brain-damaged son. Hopefully more people will learn from this story and get the help needed if they ever feel depressed and suicidal. Depression is a very dangerous illness that can impact anyone at anytime. It’s important to be aware and take action immediately if you notice something off about a loved one.