Despite the dramatically decreasing attendance, NFL games still go on weekly regardless if there’s anyone there to see them and the protests that come with it. Entitled players seem to completely ignore the harsh reality of their anti-American rhetoric, seen in the empty seats that surround them that seem to be more than fans who still come to see them play. Just when the league had reached rock bottom, people watching the demise of what was once America’s favorite sport were shocked when they saw what Arizona Cardinals receiver suddenly did out of nowhere when he booked it on field during the flag ceremony and confronted a U.S. Airman from behind.

Now, another team’s coach has had something to say about the incident and didn’t mince words when he pointed out what this scene really means.

Larry Fitzgerald, 33, is now in his 14th NFL season and has always impressed with how he plays on the field, but now it’s what he did to an Airman that he will forever be remembered for. Such is the case for all player who have worked hard to get to the NFL only to remembered for everything else they did outside the sport to make a statement. However, his message was completely different than the disrespectful rhetoric that has diminished the entire league into a mockery among all professional sports organizations.

“[Fitzgerald] has 31 catches, 361 yards and five touchdown receptions through five games — the same number of touchdowns as the entire Jets team. But when you listen to NFL people discuss the Cardinals receiver, it quickly becomes evident that he is more than merely a still-productive wideout for a man his age. He is among the most respected players in the NFL on and off the field.”

“Asked Friday to tell a Fitzgerald story, Jets coach and former Cardinals defensive coordinator Todd Bowles smiled and said: ‘I don’t have any bad ones. Larry’s one of those guys who you look up his past and everything else and it looks squeaky clean — as far as I know. Larry’s been nothing but great to me . . . He’s a very giving person off the field. He’s very respectful, a very competitive guy on the field works at it, very intelligent. Him and Brandon [Marshall] are similar that way. But I don’t have anything bad to say about Larry.’”

The same cannot be said about Marshall, who Bowles compared him to since Marshall started kneeling in protest last season while playing for the Denver Broncos. He’s still with that team this season and so are his protests, despite having lost a major endorsement over it. That unfortunate fate will never be something that Larry has to suffer because instead of following in Colin Kaepernick’s footsteps, he went out of his way to help an Airman during the flag ceremony when so many other players were focused on their protest.

Fitzgerald was on the sidelines watching the flag ceremony when he noticed the Airman’s had fallen off during the ceremony. Out of respect for the flag, the airman couldn’t let go of Old Glory to put his uniform back together, which Fitzgerald seemed to realize as well. Showing respect for the soldier and the flag, the receiver ran out on the field and got the Airman’s back by putting his hat back on his head. 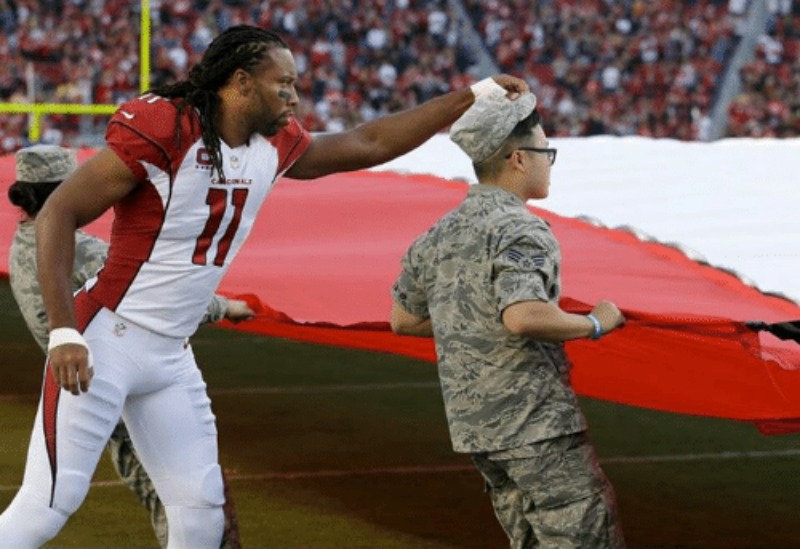 It’s a simple gesture that speaks volumes, especially since it took place last season just as the protests were percolating into the big problem they are today. Rather than following this incredible player’s example and learning from his good sportsmanship, the league went the way of Kaepernick and will end up with the same demise he’s suffering now. That’s not something the Dallas Cowboys coach wants to see, who has always been outspoken about his expectation for his players to stand for the anthem, and now has something to say about Fitzgerald and what he did out of the goodness of his own heart for our country and Servicemembers.

“Jason Garrett doesn’t do this often. But Arizona receiver Larry Fitzgerald is so good, he made an exception,” Sportsday reported. “The Cowboys head coach has put together a tape of Fitzgerald to show his players how to play the game.”

“I see a great player,” Garrett said. “I see a guy who plays the game the right way. He’s one of those guys, and this doesn’t happen very often, but we’ve used him as an example in front of our team of how to play. He’s a special player. He’s a special guy. Talk about an ambassador for the NFL. He represents everything that’s good about this game, one of the premier players of his generation. He practices the right way. He plays the right way. He does it with the right spirit. He’s a generous guy with his teammates, he’s a generous guy with guys around the league. His role in the community has been incredible.”

There are still good guys out there in a league of degenerates, racists, and anti-American idiots who are ruining it for other players and all the fans. It’s players like Fitzgerald who deserved all of the attention that the protesting one have gotten and used in all the wrong ways.