This is just one of those stories you hear and just shiver in disgust. A music teacher in southern California was arrested after it was discovered he contaminated thousands of children’s flutes with his semen. The flutes were given out to a number of school districts that were involved in a program that was designed to provide needy schoolchildren with instruments. The flutes were sent out to as many as 13 districts in the state.

Letters sent to parents alerting them of the ‘situation’ describe the teacher as an ‘independent contractor,’ adding that he led the ‘Flutes Across The World’ program for fifth graders between the ages of 10 and 11.

The flutes are colorfully decorated and painted by students all over Southern California. Investigators are in the midst of testing flutes for ‘bodily fluids.’

But it gets grimmer, investigators now believe the alleged crimes occurred over a period of years, as far back as 2012.

In a statement to parents, head of the Fountain Valley School District, Superintendent Mark Johnson, wrote that the flutes may have potentially been ‘contaminated with bodily fluids’ and urged parents to turn the instruments over to police.

Administrators for the Culver City Unified School District said that children in their schools may have been affected during the 2012-2013 school year.

‘Based on the information presently available, this individual provided the program to one grade level at one CCUSD elementary school during the 2012-2013 school year,’ Interim Superintendent Leslie Lockhart stated.

The exposure led to parents expressing disgust and outrage, with one Fountain Valley parent saying, ‘It’s disgusting, it’s unreal, you can’t even really fathom it. It makes me sick to my stomach,’

While another told, ‘I think there’s something really sick going on here’.

The California Department of Justice and the U.S. Postal Service have launched a statewide investigation into the matter.

‘As part of the investigation, we are working with local law enforcement and school districts to collect instruments, for the California Department of Justice to process,’ a spokesman said.

The US Postal service, who were responsible for transporting the flutes, said that ‘protecting children from crimes of sexual abuse and exploitation is a priority.’

‘We are still working to determine which specific schools,’ Capistrano district spokesperson Ryan Burris said in an email obtained via the Orange County Register… ‘With the number of schools in our district, this will take some time and we did not want to delay our communication to parents.’ 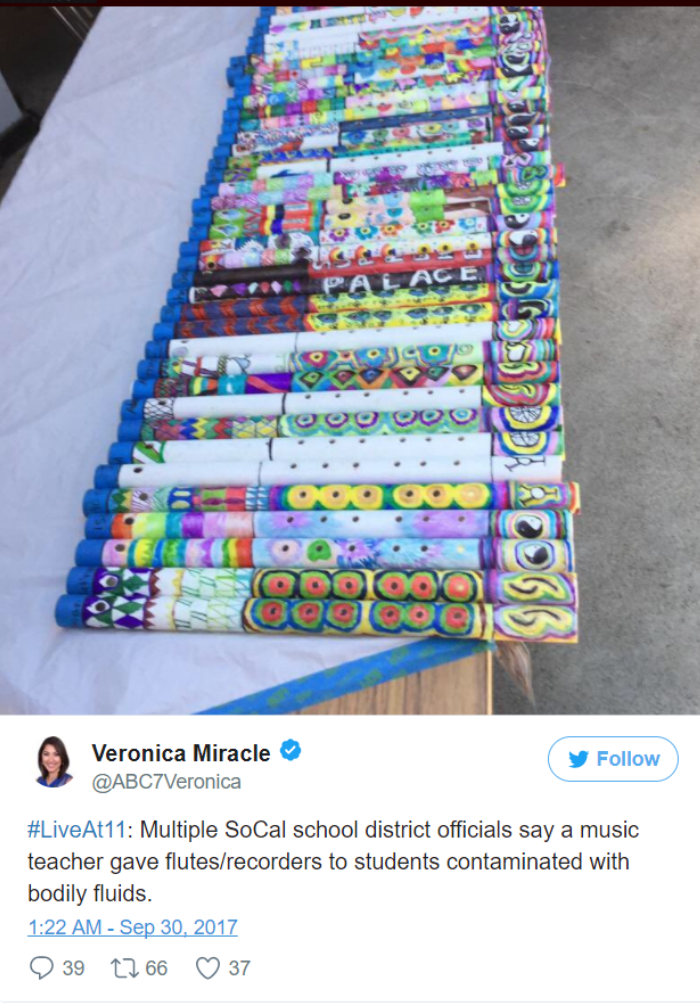 It is still unclear how the teacher was able to get away with this sick crime for so long. I guess people just don’t expect an educator to be so sick and twisted. Thankfully, he is no longer able to hurt any children anymore.