Former MLB pitcher Curt Schilling was in Puerto Rico with his Hurricane relief project Operation Bullpen and told Fox and Friends that the problem with the relief efforts is not with Donald Trump, but with leadership on the island.

“All have said that the president did everything in a pace that they’ve never seen before as far as him releasing money and releasing assets into these theaters,” Schilling said.

“The execution on the ground has been horrifying in some cases,” he said.

Schilling said that one town has had its access road blocked by a mudslide and as of Friday had received nothing in terms of aid.

“There are people … the soldiers and some of the personnel are doing everything they can, but I’ve seen the best and the worst of humanity in the last 48 to 72 hours, and it’s terrifying,” he said.

Schilling said that Americans have no idea of the extent of the damage the island suffered when Hurricane Maria hit on Sept. 20 because it has not been fully reported in the media. 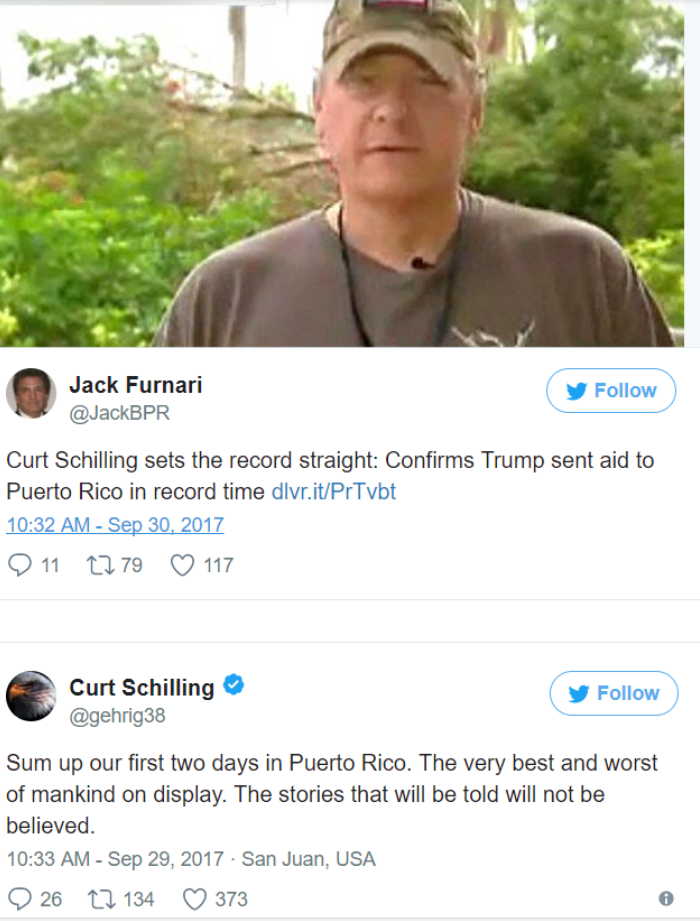 “There were eight police officers buried here and I don’t think that story has made it out either,” he said.

“When we talk about devastation, these are on levels that … I’m a student of military history. I’ve never seen anything like this,” he said.

“It looks like an atom bomb that didn’t take the bodies,” he said.

“The southeast part of the island is gone and when I say that I don’t mean that there are buildings down and people hurt,” he said. “There are towns that are gone.”