The NFL is not the only place that people are kneeling in protest but this next bit of information is sure to make you angry. Anti-American sentiment is spreading all across the country and what one man did at the Tomb of the Unknown Soldier is going too far.

A picture has recently gone viral due to a man kneeling during a ceremony at the Tomb of the Unknown Soldier at Arlington National Cemetery. The man was seen on his knees during the playing of taps.

“Taps” is a bugle call played at dusk, during flag ceremonies, and at military funerals by the United States armed forces and is regularly played at the Tomb of the Unknown Soldier.

Not standing for Taps is incredibly disrespectful.

American Military News reports the picture is sparking intense outrage on social media. It is unclear exactly why the man seen in the photo is kneeling during taps while everyone else is standing, but most people online are assuming it is in protest.

If that is the case, it follows in the footsteps of NFL players’ protests – close to 200 NFL players and coaches took a knee during the U.S. national anthem on Sunday. The protests were started by football player Colin Kaepernick last year to protest what he believes to be problems in America, namely police brutality and black inequality. Kaepernick was not signed by a professional football team this year.

Protocol at the Tomb of the Unknown Soldier is that you stand, and many times the Soldiers who guard the Tomb will directly address people who are not standing and demand they stand.

“Someone actually had the never to [take a knee] at the Tomb of the Unknown Soldier. That is the definition of absolute trash,” one Twitter user posted.

“I support everyone’s right to free speech, but I feel in the shadow of the Tomb of the Unknown Soldier it is inappropriate,” Zachary Bell tweeted.

The photo is captioned: “This photo was taken by my daughter yesterday at the tomb of the unknown soldier while they were playing TAPS. Words cannot express my anger right now. 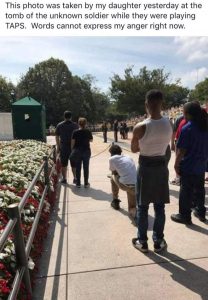 “The fact that people are kneeling at the [Tomb of the Unknown Soldier] is absolutely sickening,” one Twitter user wrote. “Fu—-g inhumane.”

“Saw a picture of someone taking a knee at the [Tomb of the Unknown Soldier] just makes me sick. I thought it wasn’t about the military,” Reese wrote on Twitter.

SALUTE TRENDING: Taking a knee during the national anthem at major league sporting events has garnered national attention by way of support for some, and outrage for others.

A combat veteran who was visiting Arlington National Cemetery yesterday at the Tomb Of The Unknown Soldier with his daughter snapped a photo of a man kneeling during the playing of TAPS.

Has professional sports protest’s bled onto hallowed ground? Arlington National Cemetery had long been a place of reflection, honor, and remembrance.

We want your to know your opinion. Should Americans be able to protest anywhere they choose in a peaceful and quiet matter, or are some places completely off limits?