Pop star Selena Gomez shocked the fans as she revealed that she had undergone a kidney transplant because of her battle against Lupus.

The 25-year-old pop star and actress has been fighting against Lupus since 2015.

Lupus is a potentially fatal disease in which the immune system attacks healthy tissue leading to inflammation in many parts of the body.

Other symptoms can be life-threatening and include damage to joints, skin, kidneys, blood, the heart, and lungs. 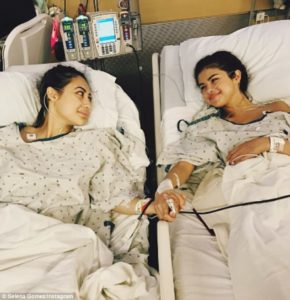 “I was diagnosed with lupus, and I’ve been through chemotherapy. That’s what my break was really about,” she revealed.

“I could’ve had a stroke. I wanted so badly to say, ‘You guys have no idea. I’m in chemotherapy. You’re a–holes. I locked myself away until I was confident and comfortable again.”

The former Disney star shared the news on Instagram to explain to fans who may have been wondering why she was “laying low” over the summer. 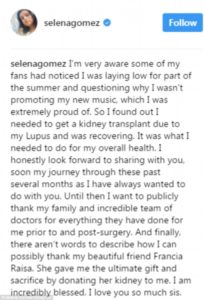 “So I found out I needed to get a kidney transplant due to my Lupus and was recovering. It was what I needed to do for my overall health,” Gomez wrote in her post, which included a photo of herself lying in a hospital bed next to her longtime friend, and donor, actress Francia Raisa.

“There aren’t words to describe how I can possibly thank my beautiful friend,” she wrote. “She gave me the ultimate gift and sacrifice by donating her kidney to me. I am incredibly blessed. I love you so much sis.”

She also posted a photo of the scar from her transplant surgery in the same Instagram post and promised her fans that she’d reveal more details about her health in the near future. 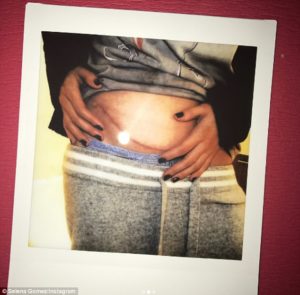 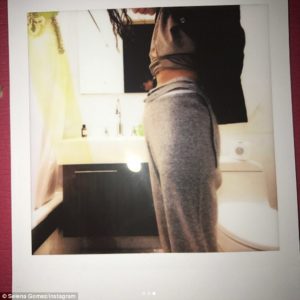 “I honestly look forward to sharing with you, soon my journey through these past several months as I have always wanted to do with you,” she said.