Alec Baldwin is now blaming the woman he shot dead for him shooting her. Yet another example of liberals everywhere passing the buck…

Embattled actor Alec Baldwin is now filing a legal brief that is laying some of the blame of the “Rust” shooting on the cinematographer and victim Halyna Hutchins herself, and herself alone.

Hutchins was an up-and-coming Hollywood cinematographer who had been killed in October when Baldwin had accidentally shot her while he was filming the movie “Rust.”

In the new court filing, Baldwin claims that his contract with the “Rust” producers is shielding him from any financial responsibility for the shooting that ended in Halyna Hutchins passing away from a gunshot wound on this New Mexico set, according to a report from the New York Post.

These legal documents are also claiming that it was Hutchins herself that told Baldwin where he should aim the gun he was using that fired the fatal shot.

The filing said that Hutchins was directing Baldwin to “hold the gun higher, to a point where it was directed toward her. She was looking carefully at the monitor and then at Baldwin, and then back again, as she gave these instructions.”

Either way, the court document that Baldwin filed is arguing that Hutchins thought that the gun was not loaded, or “cold”, as Hollywood terminology puts it.

“In giving and following these instructions, Hutchins and Baldwin shared a core, vital belief: that the gun was ‘cold’ and contained no live rounds,” the document states..

Baldwin is also stating in his filing that Hutchins had instructed him to pull the firearm’s hammer back.

Baldwin’s report goes on to assert that it wasn’t his responsibility to check the firearm he was handed to see if it was “hot” or “cold” because that was under the authority of the set armorer.

Baldwin continues to claim that he did not pull the trigger that killed Hutchins. 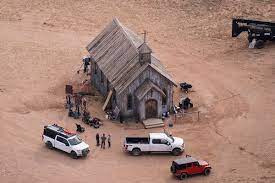 Of course, this filing is another attempt by Baldwin to absolve himself (in a word or so, “squirm out of”) any responsibility for Hutchins’ death.

Baldwin has been beset by lawsuits since this tragic incident occurred, and he continues to complain that the only reason these attorneys are going after him is because he has “deep pockets.” Well, let’s hope that he really does, because either way, he is going to be out of work for a while.

But back to the lawsuit. Baldwin is referring to a court case that Hutchins’ husband Matt filed in mid-February. The suit is painting a picture of a negligent Baldwin running a film set that was very dangerous indeed.

The 63-year-old actor is still insisting that he bears absolutely no responsibility for the tragedy in the least, but Hutchins’ husband is dismissing that claim.

“The idea that the person holding the gun and causing it to discharge is not responsible is absurd to me,” Hutchins told “Today” last month.

“But gun safety was not the only problem on that set,” Hutchins added. “There were a number of industry standards that were not practiced, and there’s multiple responsible parties.”

Even with these civil accusations, authorities in New Mexico have yet to file charges against anyone that was involved in the shooting.