While Tammra Bose was on her way home, she got stuck at a stoplight when she saw a soldier who pulled over the ramp, quickly jumped out of his car and went to talk to a homeless man.

A woman witnessed an act of kindness showed by a soldier to a homeless man and it went viral after being posted on social media.

The soldier sat on the bench with the homeless man surrounded by his things. He simply talked to the homeless man and made him feel that he had a friend after he had probably spent all day feeling anonymous to each passerby who was too busy to even look in his direction or acknowledge that he was there. 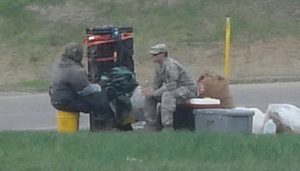 Most of the people who became homeless were veterans which is why he might have shown compassion towards the homeless man. Sometimes, aside from money, people simply need someone whom they can talk to.

In 2011, the homeless population in Kansas consisted of roughly 2,570 people, and overcrowding at homeless shelters has been an issue in the state, LJ World reported. Homelessness is also an ongoing issue for veterans. Roughly 11 percent of the adult homeless population are veterans, according to the National Coalition for Homeless Veterans. About 1.4 million other veterans are reportedly at risk for homelessness due to poverty, lack of support systems, and substandard living conditions in overcrowded housing. [Source: Opposing Views]

She also pulled over her car and watched closely the touching scene and took a photo of the heartwarming scene. It was important to her to share with the world that our fighters are not only fierce defenders of our freedom, but they hold a deep compassion for their fellow citizens of this great country, regardless of their social status.

“I would love for the world to see this picture because it is worth more than a thousand words. It is so heartwarming,” she told the news station. “I thought it was nice of the soldier to get out of his car and go talk to the man.”

Bose has shared the photos on various Facebook sites, saying she wanted to thank the soldier for the reminder to treat others with kindness.