When a woman was not seen walking out with her 10-year-old son for days, families were worried about what was going on inside their house. Police officers were then horrified on what they have found. 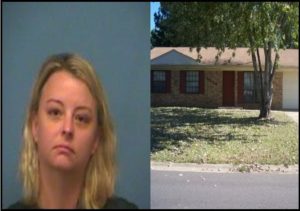 Family and neighbors become concerned when Sommer Leann Hyatt hadn’t been seen or heard from in a few days. Police officers were then dispatched to her home in Hensley, Arkansas.

On Tuesday, the Saline County Sheriff’s Office (SCSO) reported that the 33-year-old has been arrested after an April 13 incident at a home on Lakeshore Drive in Mabelvale, where deputies had gone for a welfare check. They found Hyatt and her small child in bed together. They also noticed two opened medicine bottles labeled Alprazolam — also known by the trade name Xanax — and Sertraline on a nightstand.

Apparently, it was a murder/suicide attempt as Hyatt was described as “lethargic,” having slow speech responses and being pale in color. Hyatt’s brother also told authorities she told him she had taken 50 Xanax pills before law enforcement arrived.

Xanax is a powerful sedative primarily used to treat anxiety and panic disorders. However, taking Xanax in larger doses than prescribed, or for longer than is recommended, can lead to overdose or drug addiction.

Moreover, the mother and her son were rushed to separate hospitals where they are recovering from the terrifying ordeal. She then admitted that she tried to kill herself and her son by overdosing the medication.

The child was released from Arkansas Children’s Hospital and in good condition. The father, Josh Hyatt, filed a motion for an emergency order of protection and change of custody regarding his son.

“She was trying to kill herself and take him with her for her to have the thought of him not having to feel the pain of her being gone,” He said.

Sommer, however, was booked into the Saline County Detention Center and later released on a $100,000 bond after she was arrested upon release from the hospital. She was charged with attempted murder and endangering the welfare of a minor.