“I was checking out a lady who had some iced tea,” he said. “Someone had it on sale in town.” 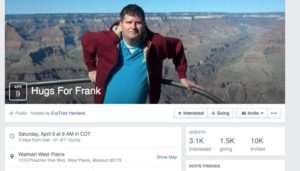 Social Media Group that has been establish for Swanson.

A Walmart employee for nearly 20 years was allegedly fired for giving customers hugs and helping them find deals.

Group of people launched a social media campaign in support of former Walmart employee Frank Swanson after he was fired from the store. It was reported the the management did not like that Swanson gave hugs to customers.

“I was asking the ladies if I could give them hugs before I hugged them,” Swanson told ATTN. “They said yes.”

Swanson was asked by the management not to give hugs to customers unless they gave permission. However, Swanson said that despite customers allow him to hug them he was still fired.

Swanson was fired following an incident in which a customer was trying to price match a competitor. Swanson reportedly offered 50 cents off her purchase to match the competitor’s price.

“I was checking out a lady who had some iced tea,” he said. “Someone had it on sale in town.”

Swanson was fired for giving the customer a discount even though the customer did not present the competitors’ ad to prove the lower price. He later found the ad, which in fact showed a discounted price.

“Frank drove to Willow Springs this morning and had them go back into their archived papers, and just like Frank remembered, [in the] bottom right corner [there was an ad for] Red Diamond Iced Tea on sale at G&W Willow Springs [for] $1.98 and [the Walmart Frank works at] price matches Willow Springs,” said Swanson’s brother, Drexel.

A spokesperson for Walmart later responded to Swanson’s firing in a statement: