Beachgoers in Florida, were angry after a woman decided it was good idea to perform a sex act on her boyfriend, according to police in Florida.

Clearwater police said that they have arrested 50-year-old Jeffrey Joseph Kernan and 26-year-old Alexandria Rowell, after being accused of drinking alcohol in public.

Both suspects were charged with possession of an open container of alcohol. 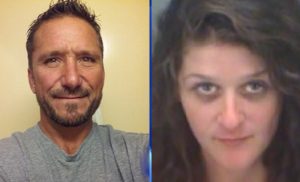 They were booked into jail, and bail has been set at $250 each.

According to the police investigation, the incident unfolded on Sunday, at around 5:00 p.m.

Kernan and Rowell were drinking alcohol on the public beach in front of families with children.

At some point, Rowell began performing sex acts on her boyfriend.

Beachgoers became angry as their children were able to see the couple having sex.

Police were called and the two lovebirds were arrested.

Police also confiscated a can of Four Loko as evidence.