This is a Missouri RINO Alert!

Here in the heartland, we pride ourselves on having a little more common sense than the coasts, and we also like to believe that we have managed to maintain a little more sense of right and wrong. Some call it common decency. Well our splendid Republican majority legislature is getting a case of squishy spine. When push comes to shove, they don’t have enough votes to boot out a senator who openly called for the president’s assassination.

Why? Most likely because they don’t want to live up to the so-called high standards by which Maria Chappell Nadal finds herself being judged by.

Here’s the tweet she issued calling for President Trump’s assassination. 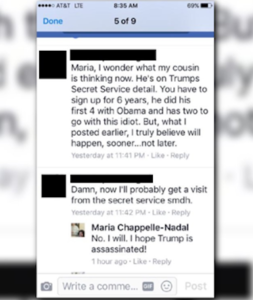 After a call for expulsion from the senate, she apologized. Wasn’t that nice? But it seems the furor and outrage waned pretty fast when the rubber met the road because the spineless in the Missouri senate are losing their nerve, pretty darned quick.

So leading Senate Republicans have threatened to expel her from the chamber. But do they have the votes?

One Senate Republican says he won’t go along with the plan.

But Dixon would stop short of voting to expel her, the Kansas City Star reported Tuesday. He did say he supported censure of Chappelle-Nadal as well as removing her from committees.

“Some will say in refusing to support expulsion I have not gone far enough, a few will say in supporting censure, and denying committee participation, I have gone too far,” he wrote, according to the Star. “After thoughtful consideration and deliberation each must do what is in his or her heart and make their best-considered decision. I wish you the best in that pursuit.”

Dixon told the Post-Dispatch he did send the letter, but would not share a copy, saying it was intended to be confidential.

“I stand by every word I said,” he said.

Well, the rats are speaking in private, behind closed doors, but at least some of them fail to have the guts to stand in the light of day and do the right thing.