During the presidential election last year Hillary Clinton remarked that Trump supporters were “deplorable’s”. Since that time Hillary’s deplorable’s have taken the name and embraced it as their own.

Hillary’s “deplorable’s” lined up in Texas after Hurricane Harvey devastated the area over the weekend and beyond. But they are not lining up expecting to receive anything. They are actually there to give. This is one of the reasons that Texas is such a great state. The rest of the country should take an example from the people of Texas.

This is Houston. Wanna know what this line is for? Food? Water? Housing? Nope. These people are waiting in line TO VOLUNTEER. #Harvey pic.twitter.com/UxGnqSNOQN 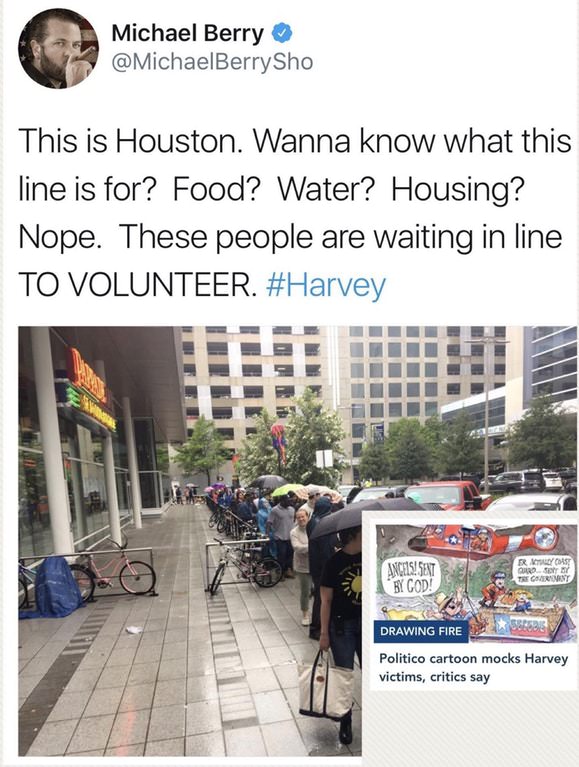 This is how the Houston area faces hardship. pic.twitter.com/3mNNLxrSAT

Meet the man who turned his furniture stores into shelters for Harvey victims https://t.co/Ds5rtz4xif

Texas doing what they do best!

This is awesome! 60-vehicle convoy of Dallas/Fort Worth police officers also on their way to help. #TexasStrong https://t.co/q4uRXlgkWP

STOP! Many will move on from #Harvey now. Just watch this 1 vid 1st. Real quick.THIS is kindness. Love your neighbor. Like this. Glorious. https://t.co/wfnssAtbD1

Earl Campbell: "Maybe God just let this happen…now the world is getting a chance to know above all places, Texas…how we live in Texas" pic.twitter.com/8bZojhE1dX