With food prices continuing to climb, are food riots on the way?

Food prices have been on the rise in the past 2 years since Biden took office. The prices of many foods, ranging from wheat and other grains to meat and oils, have shot up. That’s been driven by a slew of factors, including the rising cost of fertilizer and energy in the past year as well as the Russia-Ukraine war.

Now, globally, levels of hunger remain alarmingly high. Malnutrition is on the rise. Millions of children are facing the worst hunger crisis – with children and women hit the hardest facing famine or famine-like conditions. Inflation and economic shocks have impacted the access to food for many people. Even if food is available, for many people it is too expensive to buy reducing people’s access to food.

And all of this is because we are so badly governed by incompetent leaders with inflation reaching double digits in some cities.  The cost of food, gas, and other needs, among other things, contributed to a spike in the inflation rate of 8.5% in the twelve months ending in March 2022, which is the fastest rate increase in more than 40 years. Meanwhile, the president has repeatedly blamed the conflict in Eastern Europe for these increases but has not given a proper solution to this problem.

According to the Blue state Conservative:

The FAO Food Price Index (FFPI) is a measure of the monthly change in international prices of a basket of food commodities. It consists of the average of five commodity group price indices weighted by the average export shares of each of the groups over 2014-2016.

The adjustment of the base period for the FFPI calculation and the expansion of its price coverage, to be implemented starting in July 2020, are presented in a feature article published in the June 2020 edition of the Food Outlook. Technical background on the earlier building of the FFPI can be found in an article from November 2013. 2022’s monthly release dates are as follows: January 6, February 3, March 4, April 8, May 6, June 8, July 5, August 5, October 7, November 4, and December 2.

In the chart below is the latest June 2022 release:

Given that several countries in the region are significant importers of Russian or Ukrainian agricultural items, Human Rights Watch has issued a warning that a food crisis might once more affect North Africa and the Middle East.

The likelihood of disturbance has increased once further, according to Chris Barrett, a professor of economics at Cornell University. Around the world, especially in Asia, Africa, the Middle East, Latin America, and Europe, protests have already been sparked by rising food prices as of early June, the publication added. 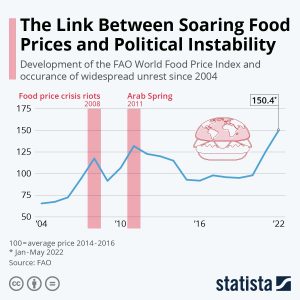 And the widely accepted idea of a cost-of-living crisis does not begin to capture the gravity of what may lie ahead. António Guterres, the UN secretary-general, warned on May 18th that the coming months threaten “the spectre of a global food shortage” that could last for years.

The high cost of staple foods has already raised the number of people who cannot be sure of getting enough to eat by 440m, to 1.6bn. Nearly 250m are on the brink of famine.

Well, unless action is taken now, more lives will be lost and the devastating effects on the lives of children today will be felt for decades to come.