If you’ve laid eyes on any kind of screen lately, chances are you already know that Vanessa Hudgens is everything, everywhere, all at once.

Vanessa Hudgens stunned in not one, but seven looks throughout the night as host of the 2022 MTV Movie and TV Awards.

On Sunday night, Hudgens was the host of the MTV Movie & TV Awards, and her skin-tight catsuit was the highlight of her fashion display. She mesmerized fans with a number of wildly different looks while perfectly executing her hosting duties at the awards show. 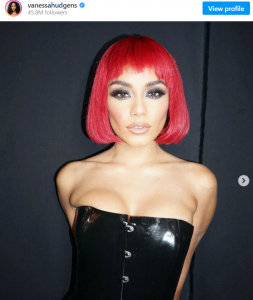 Hudgens wore everything from a stunning royal blue Vera Wang mini-dress to the bold skin-tight catsuit that has everybody talking. Hudgens added a fiery bright wig to make the outfit an absolute head-turner.

In fact, she’s making this one of the most talked-about fashion statements she selected for the evening with bold eye makeup added to the already spicy outfit.

More details of this story from Daily Caller report:

Hudgens also treated her fans to a fun, flouncy hot-pink dress, and even turned up the heat in a very ‘cow-girl’ inspired number. She appeared in a blue gingham outfit and completed her look with two long braids and a cowboy hat.

The star also rocked the stage with a very bedazzled, super-sparkly take on a “Squid-Game” inspired tracksuit, as part of her wardrobe selection.

Halfway through the evening, Hudgens sported a bralette with a short mini skirt that was held together with exaggerated, oversized safety pins that were multi-colored.

Hudgens also made an appearance in a gold-sequins mini dress during the evening.