After a dog escaped day care, he embarked on a shocking journey that almost rivals the 90s movie Homeward Bound… 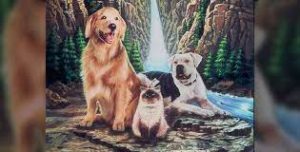 Dogs are surprisingly intelligent and observant creatures, and some breeds do better than others. Dexter is a canine that absolutely falls into the latter category.

Dexter has always been a mutt on a mission, and he proved that last February. His owner, Jeremy Henson, decided to go to Las Vegas and he got Dexter all set up a local doggy daycare, but Dexter had other plans and decided that he would rather spend his time at home.

It wasn’t long before Dexter had broken out of the daycare, making the two-mile trek to his owner’s house. When the dog jumped up and rang the doorbell, that is when Jeremy realized just what was going on with his dog and that he wasn’t too thrilled with the daycare.

“So, we’re in Zion National Park/Vegas this week & Dexter is staying at a local doggy day care,” Henson posted on Facebook. “Imagine our surprise when he rang our ring doorbell!”

The determined dog showed loud and clear that he had been paying attention by mapping out and memorizing the local area while Henson had been taking him out on walks. He rang the doorbell and it looked like he was trying to get his paws around the doorknob so that he could let himself in.

“He’s safe, but look at that 2nd pic! He was trying HARD to use that doorknob,” the post continued.

“I’m glad I walk him all over our area so he knew how to get home bc it could have turned out WAY worse with the blizzard approaching.”

To his credit, Henson was able to speak to his dog through the speaker function of the doorbell in order to keep him calm. Luckily, Henson had a nearby friend who was able to go to the house and secure the headstrong canine, and that was especially crucial because a storm was about to come in.

Time passed and his story circulated. People were amused and charmed by Dexter’s antics.

“We adopted Dexter to be a watchdog for my wife while I traveled, and he takes that job VERY seriously, so that’s probably why he was so determined to come home,” Henson said in a statement to People.

Henson was adamant that they weren’t going to hold anything against the daycare they had used, declining to make the name of the business public because they didn’t want them to go through any backlash.

However, he is also making it clear that they are very thankful for their Ring Camera doorbell.

“Previously, it made me feel safe knowing that whenever anyone came to our doorstep, we would be notified of it,” he said. “But now, I truly believe that the Ring Doorbell saved my dog’s life.

“Without it, he may have been stuck outside and wouldn’t have been able to find a warm spot to stay safe.”