Disney continues to push their radical agenda among children. And if you missed the Public Service Announcement, it’s time to Dump Disney.

Whether you’re a Christian or not, if you have a brain you understand the power of suggestion. Disney has it mastered and is actively influencing kids for the LGBTQIA agenda.

Below is the footage of Disney’s creative team admitting to their deviant agenda:

SCOOP: I’ve obtained video from inside Disney’s all-hands meeting about the Florida parental rights bill, in which executive producer Latoya Raveneau says her team has implemented a “not-at-all-secret gay agenda” and is regularly “adding queerness” to children’s programming. pic.twitter.com/eJnZMpKIXT

The company is pushing children to the LGBTQIA agenda and had countless employees arrested for links to child sex trafficking.

But Disney’s links to pedophilia go back decades. And they’re connected to the most infamous child predators of our time: Jeffrey Epstein & Ghislaine Maxwell.

“Why Was Ghislaine Maxwell Doing Fundraisers For Disney in 1985?”

Disney really does not have the best reputation. pic.twitter.com/em6qx0s25L

It’s going to be very hard for Disney to claim that it’s not a pro-pedophile organization when it literally took donations from the world’s most infamous (still) living pedophile and “groomer to the stars.”

Robinson revealed a piece of information that sheds light on Disney’s pedophilia links.

The link at Disney Cruise Line remains live at the time of writing:

Be whisked away aboard the captain’s RIB power boat to a pair of sun-soaked snorkeling sites — and prepare for an adventure like no other. Journey to picturesque Turtle Cove, Buck Island and immerse yourself in an underwater wonderland, where you’re invited to swim and snorkel amidst a school of sea turtles for approximately one hour. Afterward, make your way to your second snorkel stop — Little St James Island — where curious fish dart back and forth in the clear blue water, and colorful coral formations nestle next to amazing underwater formations. Afterward, enjoy a beverage and snack before making your way back to St Thomas Harbor.

For years, a Disney-owned and operated Caribbean cruise line was operating a ‘snorkeling tour’ for kids to Jeffrey Epstein’s renowned “Pedophile Island.”

For kids aged 8 and up, a day trip to Little St James, sometimes known as “Pedophile Island” by locals, cost $60 to $75.

The Disney Cruise did not warn parents that Epstein’s renowned island was owned by the notorious billionaire pedophile, describing it as “sun-soaked.” Rather, the literature spoke of “curious fish” that “dart back and forth in the beautiful blue water.”

What really happened on Little St James, the 75-acre private paradise in the US Virgin Islands that billionaire sex abuser Jeffrey Epstein once called home?

Independent reports: A criminal complaint from the attorney general of the US Virgin Islands, which is attempting to seize Little St James as government property, described it “the perfect hideaway and haven for trafficking young women and underage girls for sexual servitude, child abuse and sexual assault”.

On this island, the complaint says: “Epstein and his associates could avoid detection of their illegal activity from Virgin Islands and federal law enforcement, and prevent these young women and underage girls from leaving freely and escaping the abuse.”

It was in the Virgins that Epstein registered as a sex offender in 2010, following his first conviction for child prostitution in 2008. He also based his shell companies in a small unmarked office in a seaside strip mall on St Thomas, alongside a Sam’s Mini-Mart and a salon called Happy Nails.

In 1998, he bought Little St James from venture capitalist Arch Cummin via a shell company, reportedly paying just under $8 million (£6 million). The new owner quickly scoured away all the native vegetation and replaced it with 40-foot palm trees.

In light of these revelations, a circulating meme shows Disney’s “Magical Kingdom” castle as the tip of the iceberg, with Epstein’s “pedo island” child raping temple building beneath the water: (credit to @GrandOldMemes). 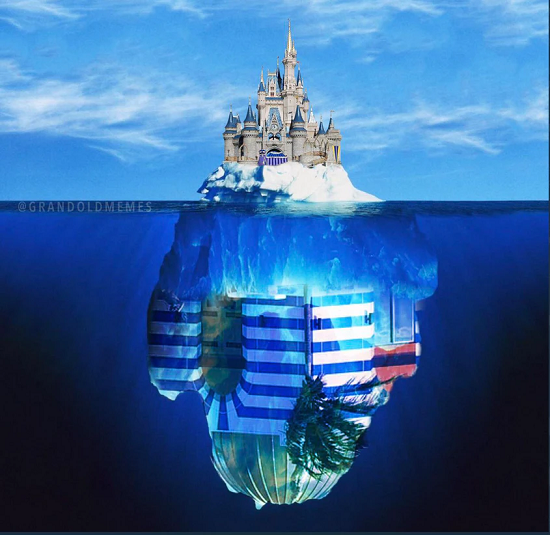 By the way, do you recall that ABC News killed news stories exposing Jeffrey Epstein — as revealed by former reporter Amy Robach — and did you know that Disney owns ABC?

Exactly. So the pedo magical kingdom of Disney owns the news networks that cover up the pedophile crimes of Jeffrey Epstein while offering Disney cruise “experiences” to children who are allowed to engage in snorkeling tours at Epstein island?

CNN has also been working hard to cover up Disney’s pedophilia and child grooming crimes, even though the very same network actually investigated Disney and exposed the pedos in years past: 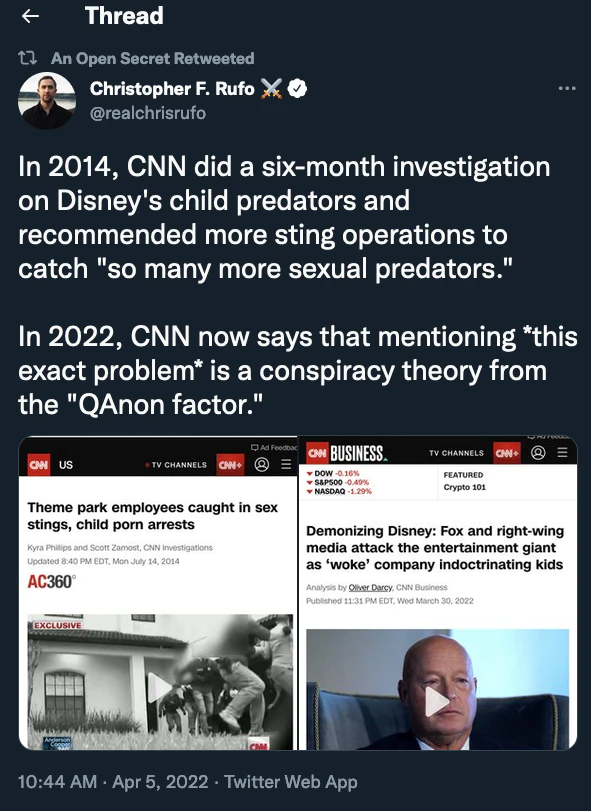 What’s abundantly clear is that the corporate media is covering up pedophilia to protect Disney, which is pushing a dangerous, demonic “woke” agenda through its movies and networks in order to recruit young children into transgender perversions and mutilations