These dads found this pervert looking under the bathroom stall, and they dished out some serious frontier justice!

A group of girls were in the women’s restroom at a Cracker Barrel restaurant in South Carolina when a startling incident went down. According to the 15-year-old girl, she was using the toilet when she noticed that something was moving near her feet. To her absolute terror, she soon discovered that 53-year-old Douglas Lane was looking under the divider from one of the adjacent stalls so that he could get a peek at her, according to WSPA.

It wasn’t long before these teens fled the restroom with several other traumatized girls who were all in town for a softball tournament. The teen rushed over to her father and he flagged down a female employee so that he could order Lane out of the bathroom, according to a local news station. It turns out that the accused individual was a serial voyeur on the sex offender registry.

“I’ll never forget the way they looked after,” a witness said. “They were traumatized.”

When this same father saw Lane exit the women’s bathroom, he was irate. Realizing that his little girl had been violated by this voyeuristic pervert, the dad’s fury totally exploded into violence, and it wasn’t long before he was pummeling the bloodied man and he was fleeing for his life from the restaurant.

“The guy came running, sprinting out the front door with a very bloody nose,” a witness said.

This man attempted to escape the blows from this infuriated father, shielding his bloodied face as he made a mad dash to the exit even though his face was covered in blood. Of course, the commotion caught the attention of other men in the restaurant, many of whom were also fathers. It was only a few seconds before several other dads swarmed Lane and trapped him in the parking lot before he finally relented. 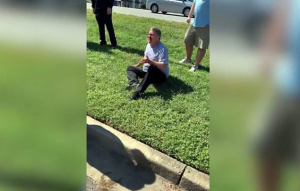 They later arrested and charged Lane with voyeurism, possession of marijuana, and possession of drug paraphernalia. He continues to maintain his innocence, claiming that he didn’t know that he had entered the women’s bathroom until he had sat down, peeking under the stall. However, police later confiscated his cell phone on the bathroom floor, collecting it as evidence.

Douglas Lane has a long history of voyeurism, being charged with it at least eight times and being convicted of it twice.

Most fathers would agree that this man got off easy with only a bloody nose to show for his perverted deeds. Considering that he has done this repeatedly, he is unlikely to be deterred by this latest incident.

Sex offenders are constantly entering and exiting the criminal justice system, and someone like Lane isn’t likely to stop just because another offense has been added to his record.