School Principal allegedly forced a 17-year-old schoolgirl to kneel down so he could measure her dress.

Amanda Durbin, a high school senior said she was uncomfortable kneeling in front of Principal Tommy Hodges, so she asked for her parents.

Rather than continuing her school day and attending lessons, the school administration chose to waste the day by waiting two hours for her parents to arrive before continuing to behave as fashion police.

According to Durbin, her school’s administration has been cracking down on the dress codes since last week.

She said that the dress code prohibits girls from wearing leggings as pants and skirts that are more than six inches above the knee.

Many girls were taken to the office for dress code infractions involving leggings once the teachers started enforcing the rules, which Amanda thought were unfair.

She and other girls decided to protest by wearing leggings with dresses to show their teachers that you could wear leggings with a dress and still be in compliance with the dress code.

“It was kind of a protest, but it was a mature protest,” she said.

On Friday, Amanda chose to wear a sweater dress with leggings, which she measured as falling 5 inches above her knee. She made it through the morning, but during her third class, she was sent to the office because her teacher said her skirt was too short. 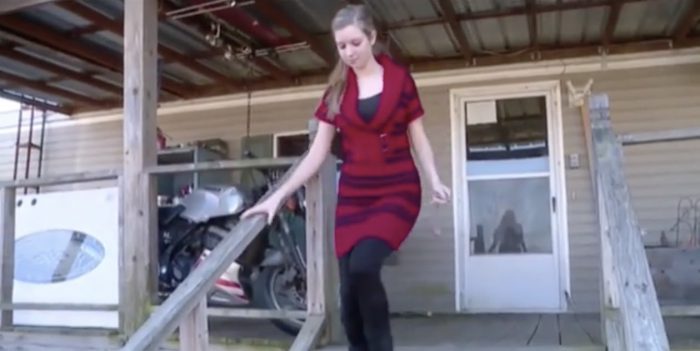 The teenager was told that in order to check if she was violating the dress code, she would need to kneel on the ground to measure the distance from her dress to the ground.

“I didn’t really appreciate having to get down on my knees, especially while I was in a dress,” she said.

Durbin said the incident mortified her, especially when her parents witnessed her kneeling in the principal’s office.

She first cleared the dress code, which called for a maximum of 6 inches of space above the knee, but when the principal asked her to extend her arms to test whether the dress would ride up, it was found to be 8 inches above the knee.

Despite the fact that the school day was nearly done, the administrator sent her home for violating the dress code.

Her mother, Alexandria, protested and argued the dress was fine to wear to church, and couldn’t see why the school would enforce against it.

“We’re not a church, we’re not a business, we’re a school. It’s where kids are learning and we’re trying to educate them every day,” Hodges said.

“If the gap between the floor and the garment is more than six inches it’s out of dress code,” he told the station, adding that parents sign off on the dress code at the beginning of the school year.

The school’s administration system stated that they are willing to consider adjustments to the dress code as long as it is conducted in a respectful manner.

Amanda said that she has received pushback from her fellow classmates for speaking out, but she is proud of herself for taking a stand.

“I’m hoping other girls will realize that you’re not some object,” she said.