A South Dakota woman is still recovering from a freak accident that left her neck sliced open.

Kendra Jensen, 28-year-old, who lives in Bridgewater, South Dakota, went through an extremely dangerous and bizarre accident after her neck was cut open by unknown debris projected at a high speed toward her on July 11.

The object that struck her neck was extremely close to her vital carotid artery, which carries blood to the head and neck, as well as her vocal cords and trachea.

Kendra said that she was in her yard cleaning up toys last week while her husband was mowing the lawn.

She says the mower kicked up some debris and hit her in the neck, leaving her bleeding profusely and in need of immediate medical attention. 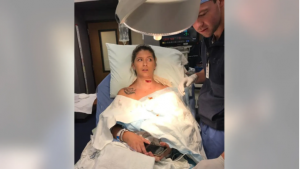 “I thought that I got hit by a rock,” Kendra said. “It felt like something hit me and then fell off me. I didn’t know that my neck had been sliced open.”

“When I walked out the door, I started picking up a couple of toys, stood up, and that’s when I was hit,” she said. “I was immediately like ‘that hurt,’ and so I grabbed my neck. That’s when I realized I was bleeding, and it was wet. I freaked out.”

“I just went into shock and just started waving my husband down and he kind of looked confused and I was like ‘I’m hurt, I’m really hurt. Something hit me and it hurt.’” Kendra said.

Her husband, Andy Jensen reacted quickly and put into practice the training he obtained from combat deployments. He said that the closes trauma center was about 45 minutes away and he feared she wouldn’t “make it.” 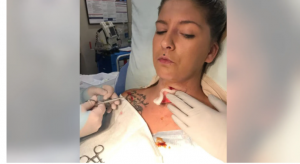 Kendra explained, “He ran to his car and grabbed his trauma bag. I make fun of him all the time for having it, I’m like, ‘We’re never going to need that.’”

“So I just put my thumbs in it and started going with the gauze,” Andy said.

An ambulance arrived and took Kendra to the hospital. It’s still not clear what exactly had hit her. She has been posting on Facebook to update her family and friends and has received thousands of comments, some of which were not liked by her, prompting her to turn off the comments for the post. 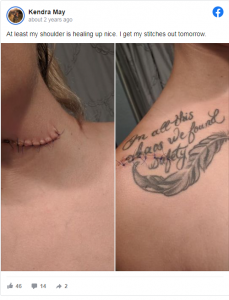 She wrote on her first post of the incident:

“Tonight I’m thankful my husband has the training he does and could act quickly to get quick clot gauze stuffed into my wound and wrapped with a pressure dressing before the ambulance arrived. I’m thankful for the EMTs, nurses, and doctors that treated me and my husband’s Sgt for driving us home. We’re on our way home so I can rest! I am so thankful!”

On July 16, Kendra posted two pictures of the stitched wounds on her neck and shoulder.

“At least my shoulder is healing up nice. I get my stitches out tomorrow.” She said.